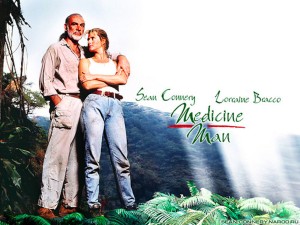 [referring to the blue tattoo on Dr. Crane’s forehead that the Rain Forest Medicine Man gave her while she was sleeping] “Oh come on Bronx. Do you really think that Tommy Fallon is going to want to walk down the aisle with a woman who’s ‘something blue’ is a tattoo on her forehead? ” – Dr. Robert Campbell

Brief Synopsis – A researcher is sent to the wilds of the Amazon in order to help a biochemist synthesize a new element that could have life saving applications.

My Take on it – This is a film that I’ve had a slight interest in seeing for quite a long time, but never really got enough enthusiasm to actually venture into watching it.

I probably should have gone with my gut here since this film is pretty bad.

Even Sean Connery is terrible here.

The story revolves around an interesting concept yet tries too hard to make this have romantic repercussions instead of focusing more on the possible world changing aspects of the plot.

I usually have more faith in Director John McTiernan (c’mon he brought us Die Hard (1988), so how could he foul up?), but this film is executed so poorly.

Lorraine Bracco is a poor choice for the leading lady opposite Connery and the two of them have no chemistry together what so ever which drags things done even more.

I guess that the best thing that can be said about this film is that Connery’s toupee is funny looking and makes you at least chuckle at something.

Bottom Line – Connery is just terrible here. The idea is an interesting one but is so poorly executed it all comes off atrociously.  Bracco is too whiny for this kind of role and she and Connery have no chemistry together. The dilemmas discussed here could have life saving repercussions but the bulk of the film spends too much time on questions of love and happiness instead of finding a cure in the wilderness of the Amazon.  Connery does have a funny looking toupee tho.

MovieRob’s Favorite Trivia – Sean Connery‘s hairstyle in this movie was based upon Composer Jerry Goldsmith‘s well-known ponytail. Meeting him at a cocktail party, Connery started the conversation by saying, “I want your hair.” Goldsmith replied, “You can’t have it, it’s mine.” Connery, and even the film’s producers themselves, felt Goldsmith’s “pulled back ponytail” fit the character of Robert Campbell very well. (From IMDB)