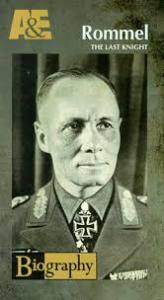 Brief Synopsis – Biography of one of the greatest generals who worked for Hitler during World War II.

My Take on it – I had many conflicting feelings watching this documentary because they try their est here to present The Desert Fox Erwin Rommel as a “good” Nazi.

He was definitely a General who was able to put honor and duty above all else and apparently he was one of the few men who was able and willing to defy direct commands by his superior that he didn’t agree with.

The information that they give us about his life, career, family and even aspirations are quite eye opening and it was great to hear all of these thoughts from different historians and even from his own son who was still around when they made this film twenty years ago.

They do a fine job showing us how many times in his illustrious career he disobeyed direct orders because they clashed with his own personal beliefs.

I’m not trying to judge him here on what he did or didn’t do, but he was definitely a brilliant commander who was truly a fine soldier who acted in ways that do seem reminiscent of the ways that knights used to act back in Medieval days.

Bottom Line – Great portrayal of a general who put honor and duty above all else. Quite an eye opening documentary because of the information that historians and even family members were able to reveal to us about his life.  Liked how they were able to present things in the way that we got to see that despite working for the German army, he apparently didn’t agree with everything that was done by his country. Recommended!

MovieRob’s Favorite Trivia – Rommel was a highly decorated officer in World War I and was awarded the Pour le Mérite for his actions on the Italian Front. In World War II, he distinguished himself as the commander of the 7th Panzer Division during the 1940 invasion of France. His leadership of German and Italian forces in the North African Campaign established his reputation as one of the most able tank commanders of the war, and earned him the nickname der Wüstenfuchs, “the Desert Fox”. He later commanded the German forces opposing the Allied cross-channel invasion of Normandy in June 1944. (From Wikipedia)