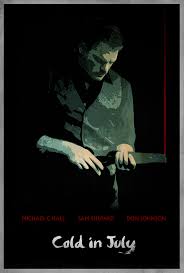 Please get me your submissions by the 29th of July by sending them to noirghezal@movierob.net

Try to think out of the box! Great choice Ghezal!

Let’s see if I felt that this movie would be worthy of being in the company of my others favorite movies in the genre of Film Noir.…

Brief Synopsis – After he accidentally kills a prowler who breaks into his house, a young farmer tries to find out why the man was there and who he really was.

My Take on it – I came across this film by accident and knew it would be perfect for this month’s GG based solely on the description I read.

The premise and ideas presented here are actually quite good and will give people so much to ponder for a long time after seeing it.

The problem tho is the way that it is presented to us and that takes away from the realistic feeling of it all.

The characters seem to be too cliched; the accents sound fake and the attempt to forcibly recapture the 80’s is too apparent.

The clothes and hairstyle seem out of place even when doing a story that takes place in the past.

The presentation of it all takes away from the real impact here and that’s really unfortunate because they could have possibly done a much better job with such a premise.

I haven’t read the book that this is based on, but I’m sure the book is much better than the way this film was done.

Bottom Line – Has some good ideas here, but it just doesn’t come off as being as genuine as it should feel. The accents sound fake and they try too hard to get the look of the 80’s with the hairstyles and clothes that it seems too forced. I think the way that this is presented takes away from the impact of this kind of premise and unfortunately, they didn’t do a better job with this kind of story.

MovieRob’s Favorite Trivia – True to the setting of the story in 1984, Michael C. Hall’s character can be heard watching the premiere of the short-lived 1984 television series The Master (AKA Master Ninja) on his living room television in one scene. Lee Van Cleef can be heard talking to the bartender. (From IMDB)

Genre Grandeur Worthy? – Nope. It was an average crime film but the setting feels too forced even if the story itself has some merit. Not one I would run to see again.