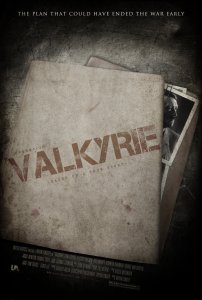 “Look them in the eye. They’ll remember you” – Col. Claus von Stauffenberg

Brief Synopsis – Based on the story of the plot to assassinate Hitler that was hatched by a number of his senior military and political figures.

My Take on it – This is an interesting idea for a film since most World War II films focus more on the Allied side of things instead of the internal forces within the German side.

Despite the fact that most people are aware of the inevitable ending of this story, they do a great job keeping things exciting and captivating the entire time.

Tom Cruise, on paper would probably seem like a terrible choice to lead this film, but he actually does quite a fine job here since there is no real need for his character to try and steal the spotlight from the story itself which is so fascinating to watch unfold.

The supporting cast is also quite good and they help give the story such a great ambiance of an ensemble story as we watch how things move along while every one involved is clearly under extreme stress and pressure during these events.

Director Bryan Singer does a wonderful job keeping this story so interesting and thrilling from start to end.

Bottom Line – Cruise actually does a fine job here especially with his ability to keep the spotlight away from just himself but instead allow us to focus on the storyline itself.  Despite being aware of the eventual outcome of the story, it was still captivating to watch from beginning to end. The supporting cast is also quite impressive and they manage to give us a great ensemble story that keeps this thrilling until the inevitable end. Recommended!