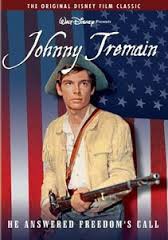 “For we must fight this war, in meeting house and Congress and the halls of Parliament, as well as on the field! But what it’s all about, you’ll really never know. And yet it-it it’s so much simpler than any of you think. We give all we have. We fight! We die, for a simple thing. Only that a man could stand. ” – James Otis

Brief Synopsis – A look at the beginnings of the American Revolution from the perspective of a young silversmith apprentice living in Boston.

My Take on it – As a fan of American History, I read this book as a kid and enjoyed it quite a lot, but never had the pleasure of seeing the film before now.

I really liked that they create a story within the context of the historical events that occurred in the days leading up to the American Revolution mainly because it gives us a great perspective of seeing how things occurred through the domino effect of the events of the day.

In addition, we get to meet a number of the famous people who helps bring these events into fruition.

The Sons of Liberty is prominently featured here and we get to easily understand their motives and actions over the course of the film.

This film was created by Disney and they do a wonderful job of making this an educational story without the feeling that we are being pandered to with it.

It’s unfortunate that Disney didn’t make more films like this that could entertain yet also educate a bit along the way.

Bottom Line – Such a great film because it not only gives us a side perspective of the events leading up to the Revolution but we also get to meet some of the famous personalities involved in the Sons of Liberty that eventually helped bring about the American Independence.  They also do a great job of making this an educational story which thankfully doesn’t pander to us that fact. It’s too bad that Disney didn’t make more films like this one in order to educate about history in such a subtle way. Recommended!

MovieRob’s Favorite Trivia – James Otis, Jr. (played by Jeff York) was one of the founders of the Sons of Liberty, and gives one of the crucial speeches in the film. Paul Revere mentions that Otis suffered “received a blow to the head” which explains his erratic behavior. In real life, Otis was hit on the head with a club by a British tax collector in 1769. However, John Adams and others recalled that Otis had been acting erratically for several years before that incident, and his erratic behavior was probably due to mental illness. It was Otis who had coined the term, “Taxation without representation is tyranny.” (From IMDB)