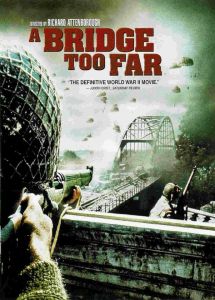 “Remember what the general said; we’re the cavalry. It would be bad form to arrive in advance of schedule. In the nick of time would do nicely. ” – Lt. Colonel J.O.E. Vandeleur

Brief Synopsis – Dramatization of one of the boldest military actions during World War II where the Allies chose to simultaneously capture three key bridges in Holland which would help them reach into Germany itself.

My Take on it – This is such a great war film and I have loved it every time that I’ve seen it.

They do a masterful job moving between the various units while keeping us easily updated as to what is constantly going on in each one of the various places that this film features.

Not only was the original mission that is depicted here a bold move by the Allied forces, but making it into a film was equally bold since so much goes on at the same time and Director Richard Attenborough expertly keeps it all in focus for us in epic fashion.

Making a film like this definitely was helpful in him making his epic “baby” Gandhi (1982) just five years later and move on to win an Oscar for Both Best Picture and Best Director for it.

The story itself is quite complex but is expertly depicted in just under three hours giving us the satisfaction that we can view so much of what happened.

None fo the ensemble cast really stick out as a lead here and that works to this films benefit because it is so much fun watching all of them appear (even if just for a scene or two).

Bottom Line – Star studded affair that shows how great an ensemble film can be. Not only was the mission bold, but so was the decision to make a movie about it.  The film masterfully moves between the different units and the use of famous faces actually helps the viewer keep track of who is where at all times.  The story is quite epic in scope and it does an amazing job getting so much of this story across in only a three hour runtime. None of the actors stand out as the star per se and the fact that there are so many stars here makes things even more fun to watch.  This film was proof that Attenborough was able to carry an epic film as Director which would eventually lead to his Oscar winning epic Gandhi (1982) just five years later. Highly Recommended!

MovieRob’s Favorite Trivia – According to the DVD edition, the real-life Colonel John Frost chided Anthony Hopkins during the filming, for running from house to house during the battle for Arnhem. According to Hopkins, Frost told him that a British officer would never have run, but would have shown disdain for enemy fire by walking from place to place. Hopkins claims he tried, but as soon as the firing started, instincts took over, and he ran as fast as he could. (From IMDB)