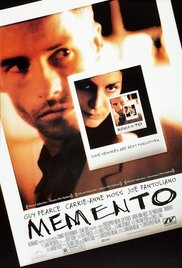 For this month’s next review for Genre Grandeur – Film Noir Movies, here’s a review of Memento (2000) by Darren of Movie Reviews 101

Plot: A man juggles searching for his wife’s murderer and keeping his short-term memory loss from being an obstacle.

Story: Memento starts as Leonard (Pearce) a man with no short-term memory, but has come up with a way to cope with the situation where he leaves notes on his body which will give him answers to his wife murder. Assisting him on this investigation is Natalie’s (Moss) and Teddy (Pantoliano) but with Leonard’s handicap are people taking advantage of him?

We are left to wonder just who did kill Leonard’s wife because each scene points him in a different direction to who was behind it all.

Characters – Leonard is a man who is investigating his own wife’s death but with his own short-term memory problem Leonard is finding it hard to figure out who to trust, with only the answers tattooed on his body. Natalie is a woman that Leonard meets who has also lost somebody and she does help him. Teddy is the other main person that is helping Leonard through the situation.

Performance – Guy Pearce does give the performance of his career showing the full emotion his character is going through. Carrie-Anne Moss is good with her limited screen time. Joe Pantoliano is brilliant in the supporting role as we never know the truth about his character.

Story – At the core of this story we have a mystery that needs to be sold, but the story is told in a different order than we would expect, even though this film is told in reverse the twists are still coming through thick and fast leaving us wondering about the characters involved from start to finish.

Mystery/Thriller – The mystery comes into play early as we are giving the idea that someone has killed Leonard’s wife and now we want to know where things are going even though things are in reverse the clues keep popping up.

Settings – The settings show us just where the characters are getting through with no big set pieces but just the crime world the characters find themselves in.

Special Effects – We have a few effects but we don’t need too many for the story to unfold.

Scene of the Movie – ‘So, I am chasing this guy’

I always get annoyed by one thing in a movie, this is that moment – I am picking the slightly under written character of Natalie as the picky point.

Final Thoughts – This is one of the great thrillers ever made, it truly will keep you wondering even if the beginning is the end of the story.

Overall: Must watch for the Nolan fans.