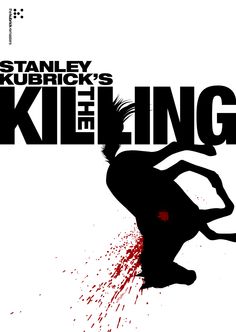 For this month’s next review for Genre Grandeur – Film Noir Movies, here’s a review of The Killing (1956) by me. 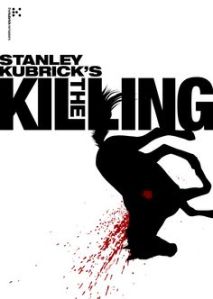 “You know Fay, the biggest mistake I made before was shooting for peanuts. Five years have taught me one thing, if nothing else: Anytime you take a chance, you better be sure the rewards are worth the risk. Because they could put you away just as fast for a $10 heist as they can for a million dollar job. ” – Johnny Clay

Brief Synopsis – A criminal plans a daring heist of a racetrack along with four other men.

My Take on it – Ever since I saw this film nearly 18 years ago, I instantly fell in love with it and believe that it’s one of the best heist films ever made.

In addition, the way that this film was shot by famed Director Stanley Kubrick helps keep the tension moving the entire time.

Kubrick chose to use the non-traditional non-linear storyline in a spectacular way because it keeps us informed while still trying to keep us off-balance trying to follow the amazing story.

The non-linear form of storytelling has become a favorite of some of the best modern directors like Quentin Tarantino and many of the modern Neo-Noir films have borrowed heavily from this film.

The film is accompanied by a running narration and Kubrick uses it to keep us distracted as to what is really going on because their isn’t always a correlation between what is being said and being done.

The cast is low-key but they all do a wonderful job especially the lead character played by Sterling Hayden.

I’ve enjoyed many of Kubrick’s films, but this is by far my favorite and I think he best achievement overall.

Bottom Line – Such an amazing heist movie that is planned out so well via its storytelling method.  The non-linear story works extremely well and always keeps us on our toes. One of Kubrick’s best movies because he is able to keep the tension going the entire time. The narration helps keep us distracted as to what is really happening since the story isn’t taking place in real time.  Some of the best neo-noir uses this film as a basis for much of the way things are done today.  Highly Recommended!

MovieRob’s Favorite Trivia –  The narration was added at the studio’s insistence. Stanley Kubrick hated the idea and thus makes much of the information that the narrator provides false or mistaken. (From IMDB)