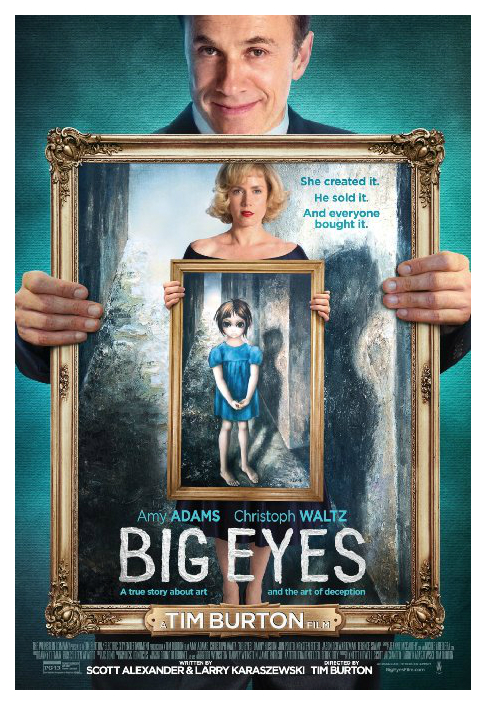 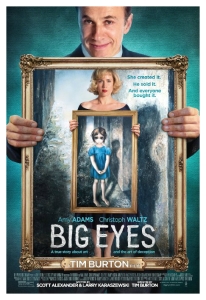 “It’s like a mirage. From a distance, you look like a painter. But up close, there’s not much there.” – Margaret Keane

Brief Synopsis – Based on the true story of a female artist in the 50’s and 60’s who let her husband pose as the true artist since they didn’t believe that anyone would buy painting drawn by a woman.

My Take on it – This is the next film that Chet and Rodney of Down the Hall Podcast chose to discuss on their show, so here’s my review of it.

I’ve never been the biggest fan of Tim Burton’s films since they are usually filmed in a more Gothic aspect than I am fond of.

This film actually works even better due to his steady hand in making it since the paintings themselves are the strange element that he needs in order to tell this story using his eccentric style.

Before initially seeing this a few years back, I was deterred from seeing this due to my lack of real knowledge about the art world, but thinking the way I thought was a real fallacy since the film really isn’t about the way one piants or even about whether her paintings were good or not.

This is essentially a story about a woman’s struggle for independence in life through her painting.

She wanted to be able to support herself and her daughter by using her artistic passion to succeed.

This film is held together so well tho not by its story but by its characters.

The two leads are played by Amy Adams and Christoph Waltz and they both exquisitely portray their characters bringing them to full life in front of us.

The themes depicted here are great and they do a wonderful job portraying the struggles for women’s rights during the 50’s and 60’s.

Bottom Line – Very interesting story that says so much more about women’s rights during the 50’s and 60’s than one would expect. Adams and Waltz are both superb here and play these characters quite well.  Burton was a great choice to direct this due to the eccentric take on the story. Not a film that needs an understanding of the art world into to comprehend everything that happens here because its more of a story about a woman’s struggle for independence through the art of painting than the way one paints. Recommended!

MovieRob’s Favorite Trivia –  For research, Amy Adams consulted with the real-life Margaret Keane who was in her late 80s. According to Adams, Keane was overwhelmed by the notion that anybody would want to make a film about her life. (From IMDB)