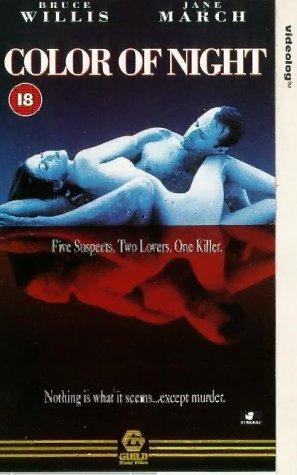 This is the final of 7 reviews for Catherine of Thoughts All Sorts –  The Colours Blogathon. 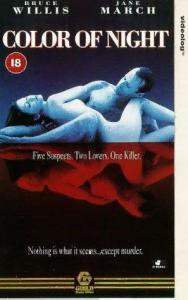 “Always guess the cliche, and you won’t be disappointed. ” – Dr. Bill Capa

Brief Synopsis – A psychiatrist takes over his friend’s therapy group in order to find his colleagues murderer.

My Take on it – This is a film that I recall watching over twenty years ago and it didn’t leave much of a lasting impression on me.

As the storyline moved along, I was reminded about certain surprises later on that made me lose interest in what was happening.

The storyline is completely silly and the added effect of it not being interesting is a double killer of films like these.

This film is filled with lots of sex, nudity and other adult themed ideas and upon reflection, most are completely unnecessarya nd it feels as if they added them all in to distract us from the fact that the storyline doesn’t make much sense.

Bruce Willis is terrible in this role and it’s so easy to not care about his character pr what will happen to him.

What’s even worse is the fact that the rest of the cats are also terrible and actually make Willis’ performance seem better compared to what they give us.

Basically stay far away from this film because there truly isn’t anything that makes it worthwhile to endure the nearly 2.5 hours of this boring story.

Bottom Line – Completely silly and boring film. The fact that this film is filled with lots of nudity and “adult-themed” situations feels tacked on in order to make us believe that the story itself has some “meat” on it.  Willis’s character isn’t really interesting enough for us to care about and that goes double for most of the other characters. Stay away from this film because it really just doesn’t make enough sense to warrant watching it.

MovieRob’s Favorite Trivia – Although this film was a box-office failure, it did very well in the home video market. According to Billboard magazine, this film was one of the Top 20 most-rented films in 1995. (From IMDB)