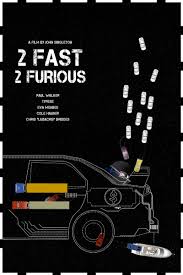 “Come on, man. Guns, murderers and crooked cops? I was made for this, bro. ” – Roman

Brief Synopsis – Former cop Brian O’Connor once again must go undercover to stop a drug lord with the help of a childhood friend who is also a street racer.

My Take on it – Going along with my theme that the films in this franchise generally get better as they move along, this film is only slightly better than the original.

It borrows heavily from much of the plot of the original and rehashes a lot of it.

The addition of Tyrese Gibson to the cast was a great idea since he adds a much needed levity to the premise and instead of it all being extremely over-dramatic, we get to see how the characters have a realistic feeling to the way things happen.

This film (like most of the chapters in this franchise) looks amazing and the way that they shot the action scenes with the racing and driving is so much fun to watch despite the somewhat boring plot.

The action is high paced and if you’re looking for an adrenaline rush, you can’t go wrong with this film or any of the other films in the franchise.

Bottom Line – Slightly better than the first film because the addition of Gibson adds a much needed levity to the premise. The story here is quite similar to the original and rehashes some of the plot structure. As with all movies in this franchise, they look stunning due to the high paced action, but the plot itself leaves much to be desired.

MovieRob’s Favorite Trivia – To keep the feel of the movie interesting, Director John Singleton often encouraged the actors to improvise during filming. Many of the humorous moments on screen are ad-libbed. (From IMDB)