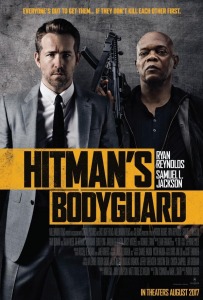 “You’ve got a speck of blood on your… everywhere. ” – Michael

Brief Synopsis – A bodyguard for hire is assigned to protect a hitman and deliver him to the Hague court as a witness before he is killed.

My Take on it – This is a film that I’ve had interest in seeing ever since I saw the trailer a few months back.

The fact that I was appalled that this red band trailer for this film was shown before both Wonder Woman (2017) and Spider-Man: Homecoming (2017) for my 13 and 10 year old sons to have to hear all of the cursing still didn’t deter me from wanting to see what this was all about.

Unfortunately tho, this film should have been made as an action-drama instead of a comedy (see Trivia below) and I think that it would have been so much better had it been presented that way.

I love both Ryan Reynolds and Samuel L. Jackson, but the two of them have terrible chemistry together in this film.

Granted, that may have been done on purpose, but it keeps me from liking what they do and how they act.

The tongue-in-cheek style of action just doesn’t work very well and the plot is too minimalistic to really be effective.

The cursing is too excessive and instead of being funny, just makes it seem too juvenile.

This is all quite a shame because the potential is really them yet is quite wasted.

Bottom Line – Interesting concept that just doesn’t work well as a comedy. Reynolds and Jackson have terrible chemistry together but that might actually  have been done on purpose. The tongue in cheek style just doesn’t work as well as it probably should.  The trailer is more interesting to watch than the movie and I wasn’t the biggest fan of the that either when they showed the red band (unrated) version before two films that I took my young sons to see a few months back.

MovieRob’s Favorite Trivia – While originally intended as a drama, the script underwent a “frantic” two-week rewrite to be remade into a comedy several weeks prior to filming. (From IMDB)