This month’s Genre has been chosen by Robb of Red Bezzle and it is Remade Movies.

Love or hate, compare and contrast, and dare to say they’re better. It could be a relocated remake a la The Magnificent Seven, an Animation to Live Action remake similar to The Jungle Book or straight forward reimagining such as The Texas Chainsaw Massacre.

Please get me your submissions by the 25th of September by sending them to remaderobb@movierob.net (ok, that day passed, but I’ll still accept them til tom 27th of Sep)

Try to think out of the box! Great choice Robb!

Let’s see if I felt that this movie would be worthy of being in the company of my others favorite movies in the genre of Re-Made Movies.… 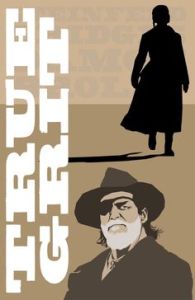 “You must pay for everything in this world, one way and another. There is nothing free except the grace of God.” – Mattie Ross

Brief Synopsis – A young girl seeks the help of a rough Federal Marshall in tracking down the murderer of her father.

My Take on it – This is another film that I think they did a great job making it, but the question needs to be asked as to why there was a need to remake such a story.

The original 1969 version was done quite well and the only real additions to this one are the more modern viewpoint of violence in movies and the pacing of the story itself.

Other than those two aspects, I think this film despite being quite good doesn’t really add much to the original view of it all.

The cast is great and The Coen Brothers chose their actors quite well.

Hailee Steinfeld does an amazing job in the lead role and she is joined by Jeff Bridges, Matt Damon and Josh Brolin who all also do nice jobs with these characters.

I personally am a big fan of most of the films made by the Coen duo, but I still question whether this film was really necessary to make since it’s essential the same film that was made 41 years earlier but done with the modern audience in mind.

Bottom Line – Good film but doesn’t add much to the original film’s premise. Steinfeld is great here and it’s fun watching Bridges, Damon and Brolin. The Coen Brothers always have interesting ways of telling stories and this is no exception, but the truth is that there isn’t much added to this story that would really warrant it being remade besides their more realistic views of violence and the story itself. Recommended!

MovieRob’s Favorite Trivia – No computer-generated special effects were used in the creation of the town of Fort Smith. The town of Granger, Texas, was used as a double in the movie, due to several sections of the city still displaying the period’s city planning with wide streets. The art department did painstaking efforts to add details: fake buildings were built between existing ones, and existing buildings were painted or redressed with facades to give them the correct period appearance; sand was put onto the cobblestone streets to get the appearance of dirt roads; 20th century telephone poles were either removed or redressed as trees. Since the movie takes place in the winter, the leaves of one tree that came into frame during the hanging scene had to be picked-off by hand. Finally, a small stretch of railroad was built for a period train that was brought in from a museum.  (From IMDB)

Genre Grandeur Worthy? – Good movie, but also wasn’t really much of a need to remake it.  The Coen Brother’s take on it is different than the original, but I still prefer the Wayne version.