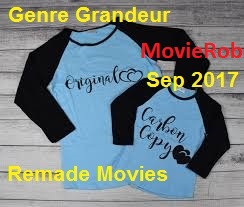 For this month’s next  review for Genre Grandeur – Re-Made Movies, here’s a review of The Departed (2006) by me

Thanks again to Robb of Red Bezzle for choosing this month’s genre.

Next month’s Genre has been chosen by Kira of Film and TV 101 and it is Western Crossover Movies.

“What we generally do – in this country… is one guy brings the items and the other guy pays him. No tickee, no laundry! ” – Frank

Brief Synopsis – Both sides of the law plant an undercover agent on the other side each must try to ferret out the other before they are exposed.

My Take on it – Well, my second and final choice for this month’s GG is also an American adaptation of a foreign film and is (til today) the only film to win Best Picture at the Oscars as a foreign language remake.

The plot is not your typical Oscar bait yet the cat and mouse story keeps things moving at some a great pace.

The original idea is amazing and to adapt it from Hong Kong to Boston was a great choice due to the crime culture in Boston which has everyone toeing the line between good and evil.

They are able to build on the original premise so well that both films seem so different and there is no question in my mind that this one is far superior.

Director Martin Scorsese is able to keep us on the edge of our seats for 2.5 hours and throws so many surprises at us along the way.

This film is quite deserving of it’s Oscar win for Best Picture that year along with wins for Director, Film Editing and Adapted Screenplay.

This is by far my Favorite film by Scorsese because he gets everything right in the way he presents it all to us.

Bottom Line – Amazing cat and mouse plot keeps thing thrilling the whole way thru. This is far superior a story than the original Asian version of the story.  The cast is unbelievably talented and Scorsese does a wonderful job keeping us on the edge of our seats the whole time.  The choice to place this film in Boston is genius because of the crime culture there really toeing the line between good and evil.  Definitely was deserving of winning Best Picture that year at the Oscars along with 3 other wins for Director, Adapted Screenplay and Film Editing.  This is by far my favorite film by Scorsese. Highly Highly Recommended!

MovieRob’s Favorite Trivia – When receiving the top award from the Director’s Guild of America for this film, Martin Scorsese said that this “is the first movie I have ever done with a plot.” (From IMDB)