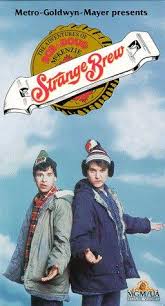 Thanks to Gill of Reelweegiemidget for this recommendation. 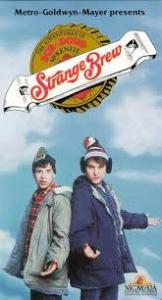 Brief Synopsis – Two beer drinking Canadian brothers get the job of their dreams working in a beer factory but quickly find out that things are not what they seem.

My Take on it – This is a film that I recall loving as a kid after one of my brothers and his friends introduced me to these characters along with other SCTV personalities.

I watched this film on cable numerous times and recall rolling on the ground laughing every time I watched the antics of these two ‘hoser’ brothers.

Unfortunately thirty five years after it came out, the film just doesn’t come across as being as humorous now as it did for me back then.

The storyline is quite silly and the antics of the characters just don’t work as well as I recalled.

What makes this film stand out tho is the amazing chemistry between Rick Moranis and Dave Thomas who are perfect together in every scene despite the film being a near-dud.

Watching this film truly makes me miss Moranis who retired from acting about a decade later after a personal tragedy.

I really wanted to enjoy this one more, but it wasn’t easy to find much to laugh at.

Bottom Line – Not as funny now as it was back then. Moranis and Thomas have amazing chemistry together but the story comes across as being way too silly and just isn’t as impactful (or even funny) as one would hope.

MovieRob’s Favorite Trivia – The role of Brewmeister Smith was written with Max von Sydow in mind. But Rick Moranis and Dave Thomas thought actually enlisting him would be impossible. It turns out that Freddie Fields, then-president of MGM had just produced Victory (1981), which starred von Sydow. So he sent the esteemed actor the script. Instead of hashing it out with Fields, von Sydow ran it by his son, who was a huge SCTV (1976) fan and encouraged his father to take the role. (From IMDB)