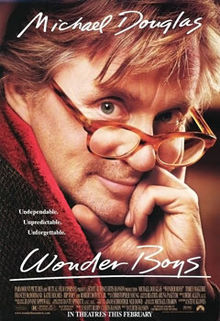 Thanks to Satu of FairyTale Pictures for this recommendation.

Brief Synopsis – A professor must deal with numerous personal events at the same time that his editor visits in order to finalize his latest novel.

My Take on it – This is a film that I saw not long after it came out and wasn’t quite impressed by it.

Working in an academic environment, I know how Professors and University faculty act and this film just didn’t resonate very well with me despite my familiarity with it.

When Satu suggested I rewatch it, I decided that perhaps the intervening 16 years would help me enjoy the film more, but that was not to be.

I still couldn’t find much in this film that kept my interest peaked for more than a few moments at a time.

This is quite surprising due to the fact that the cast is great.

I didn’t care for any of the character or for that matter anything that happens to them.

The Oscar and Globe Winning Song by Bob Dylan is quite good when you listen to the words, but that isn’t always so easy since he mumbles his way through it all.

Magire’s character is the standout among them all and I really was impressed with his soliloquy about celebrity suicides which is the most memorable part of the film as far as I’m concerned.

Bottom Line – Not as good a film as one would expect with such a stellar cast. The going ons of these characters just aren’t interesting enough to are about their lives. The Oscar and Globe winning song by Bob Dylan is quite good despite the fact that he mumbles his way through the song.  Maguire’s character is the standout among the cast and his soliloquy about Hollywood suicides is quite memorable.

MovieRob’s Favorite Trivia – In the theatrical version James Leer (Tobey Maguire) included Alan Ladd’s death in his list of celebrity suicides. After complaints from Ladd’s family, Paramount removed the offending line in all future releases of the film, including home video. Because of this, VHS and DVD releases carry a disclaimer, shown before the feature, warning that the film has been edited for content.  (From IMDB)