Thanks to Curt of Hypersonic 55’s for this recommendation. 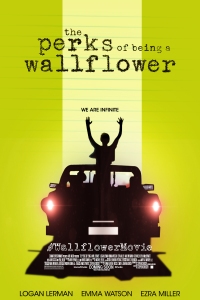 “My doctor said we can’t choose where we come from but we can choose where we go from there. I know it’s not all the answers but it was enough to start putting these pieces together. ” – Charlie

Brief Synopsis – A troubled teen starting high school in the early 1990’s befriends a group of seniors who open his world to lots of new possibilities.

My Take on it – Being a child of the 80’s who finished high school in 1992, I will always have a soft spot in my heart for those days.

This film brought back so many memories of those days for me just by the tone and settings of it all.

This film takes place in the early 90’s in suburban Pittsburgh.

Having grown up in a similar local in suburban Detroit, much of what happens to these characters could conceivably have occurred there just as well.

The cast is superb with Emma Watson, Ezra Miller and Logan Lerman all giving outstanding performances here that could very well be perceived amongst each of their best work.

The dialogue is written so well that I assume that each of the characters must be based on real people and real situations since they feel so genuine throughout.

The soundtrack worked so beautifully and was able to transport me back in time to such a nostalgic time in my life.

Even though i just watched this recently, I now have such an urge to watch it again real soon.

I think I definitely need to read the book that this film is based on!!

Bottom Line – Such an amazing coming of age story that resonates so much for me probably largely due to the fact that it takes place in the early 90’s.  Amazing cast with Watson, Miller and Lerman all giving stellar performances.  The dialogue is written so well and the characters all feel like they are heavily based on real people because they come across as being so genuine. Amazing soundtrack helps transport us back to the mid-west in the 90’s and was quite nostalgic for me. I think I need to read this book one of these days. Highly Recommended!

MovieRob’s Favorite Trivia – In Entertainment Weekly, Emma Watson reported that she took the role because Stephen Chbosky told her that “Not only is this going to be one of the most important parts you play, you’re also going to have the summer of your life and meet some of your best friends.” She also reported that the claim came true. (From IMDB)