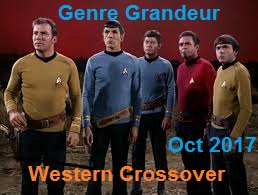 For this month’s next review for Genre Grandeur – Western Crossover Movies, here’s a review of Hell or High Water (2015) by Kira of Film and TV 101

A divorced father and his loose cannon older brother resort to desperate measures in a bid to save the family ranch in West Texas.

Following the death of their mother, unemployed oil and gas worker Toby Howard (Chris Pine) and his ex-con older brother Tanner (Ben Foster) begin to rob banks so as not to lose her ranch to the Texas Midland Bank. Meanwhile, ageing Texas Ranger Marcus Hamilton (Jeff Bridges) is nearing retirement, but is intent on seeing out the case with his partner Alberto Parker (Gil Birmingham). Together, they try to figure out the well-intentioned bank robbers’ next moves, resulting in an intense showdown.

One of my most anticipated films from what is now last year was Hell Or High Water. The trailer had taken my fancy a while before it had been released in cinemas, but as it was I never made the trip. Well, I finally got to see the film the other day, and I have to say it was well worth the wait. It didn’t quite turn out to be what I had expected, although what that was I’m not quite sure even now after watching the film. What I do know, however, is that I was very impressed by what I saw.

As good as I thought Chris Pine was here, I’m going to refrain from talking about him for the simple reason that people will only read so many words before jumping ship, so I would rather focus on the two ‘supporting’ actors in this review. Ben Foster was excellent as Tanner Howard. He gave an enthralling performance as the ex-con who you kind of felt was going robbing the banks with his brother to make up for all the time he spent in prison, unable to help care for their mother. So many people are talking about awards for this film, and who will get those awards. I am not overly familiar with Foster’s work, but would personally love to see him gain all the recognition he deserves for the stellar work he put in here.

Jeff Bridges was that other ‘supporting’ actor who is the other contender for those prestigious awards I would think. It was another very strong performance in a film that really did consist of some masterful acting. He portrayed Texas Ranger who had seen it all and was now facing the prospect of retirement and not looking forward to it – a character not too dissimilar to that of Tommy Lee Jone’s Ed Tom Bell in No Country For Old Men, another contemporary western that I would highly recommend. Again, it was a display of terrific acting that fully deserves every award it is nominated for should the powers that be decide Bridges was the supporting actor here.

This film is one that you savour as you watch it. It is a wonderful, brooding slow-burner of a film, and this allows you fully take in every part of what is put in front of you. The dialogue and the way it was delivered by the people it was given to was a wondrous thing. The landscapes captured by the cinematographers were breath-taking. There isn’t really a part of this film I could fault, if I’m completely honest with you, and I think that really says all anyone needs to know, because if there’s something for me to complain about, I don’t tend to be backwards in coming forwards about it, do I?

Overall, Hell or High Water is a beautifully made contemporary western that sits proudly amongst many of the westerns that have been made of late. It is easily one of the better ones that are leading the resurgence in the genre, and if this is how filmmakers mean to go on, they have my full support. This would be a great film particularly for people around my age, who perhaps have avoided westerns for being a dated style of film. The contemporary sub-genre is one that hold a lot of promise in my opinion, and is an excellent gateway to the other, more classically formulated films, as this film proves very well.