This is my third of four entries (2 pairs) for this great Blogathon idea by Catherine of Thoughts All Sorts and Gill of Real Weegie Midget Reviews. 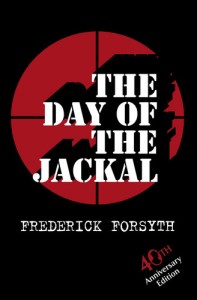 “We’re in trouble on this one. Our agents inside the OAS can’t pin him down, since not even the OAS knows who he is. Action Service can’t destroy him; they don’t know who to destroy. The gendarmes, all forty-eight thousand of them, can’t pursue him; they don’t know who to pursue. The police can’t arrest him. How can they? They don’t know who to arrest. Without a name, all other proposals are meaningless. The first task, then, is to find it. We get a name, we get a passport and a face. And with a face, we get an arrest. But to find his name, and to do it in secret, is a job of pure detective work. – Berthier

Brief Synopsis – A French Government official is tasked with finding a would be assassin before he is able to carry out his plan to assassinate the French President.

My Take on it – This is a film that I saw years ago, but didn’t remember it at all.

They do an amazing job of telling a political thriller by building it up so well along the way.

The characters are all fascinating to watch as they all try to outsmarts each other in order to complete their mission in time.

The story does a wonderful job using the cat and mouse aspect and they are able to keep things so gripping the whole way through.

The choice of using mostly unknown actors was a great one IMHO because it allows us to truly believe that this story is based on factual historic event as opposed to being a complete work of fiction.

This story uses many tactics and ideas that have become completely irrelevant in our modern computer age, but the ability to see how things were done over five decades ago are still interesting and fascinating to watch as they unfold before our eyes.

Bottom Line – Such an amazing thriller because it builds it all up so well. The characters are all fascinating to watch as they each try to get their task done in time. The way that the story utilizes a cat and mouse game is spectacularly done because they are able to keep things gripping the entire time. Really enjoyed the fact that none of the actors are huge stars because it allows us to really feel as if we are watching the retelling of an actual historic event instead of a work of fiction. Many of the tactics used ere are irrelevant in today’s computer world, but it’s still great to see how things were done five decades ago by the use of their ‘modern’ technology and ideas.  Highly Recommended!

MovieRob’s Favorite Trivia – Director Fred Zinnemann wanted the Jackal to be played by someone anonymous and indistinct, so he eschewed famous names in favour of casting a then-unknown actor named Edward Fox. He later admitted this concept may have led to the film’s lack of expected success when it released in theatres. (From IMDB)