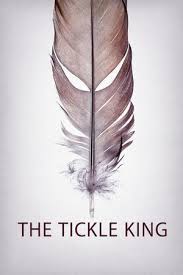 u might have bitten off more than you can chew.” – David D’Amato

Brief Synopsis – Following the release of the film Tickled (2016), the filmmakers are pursued by lawyers and investigators sent by the main antagonist of the film.

My Take on it – Last month, my friend Alex from Alex Raphael, recommended the movie Tickled (2016) for me to watch for my latest Movies From the Hat series.

I didn’t know anything about it before I watched it and it was such a fascinating Documentary that is easily became one of my favorite films recommended to me in this round.

While researching info about the film for my review, I found out that a continuation film was filmed about events that happened while the film makers were on the film festival circuit.

They encountered some of the people depicted in the movie and also numerous associates who were sent to gather information about their film.

This is amazing that they were able to film so many of the new confrontations because it just gets crazier and crazier as things move along and it would be hard to believe some of these events if it were not to have been captured on film.

They must have expected some of these confrontations and made sure that it would be possible to capture things on film at a moments notice.

This actually helps us feel as if we are right there witnessing these conversations and confrontations as they are happening.

Bottom Line – Extremely fascinating continuation of the story from the original documentary that just gets crazier and crazier while the film was starting to be shown on the film festival circuit. The fact that they were able to get so much of these confrontations on film is amazing and seems to point to the fact that they knew to expect such actions. The way that we feel as if we are right there witnessing these conversations is amazingly done. Highly Recommended!