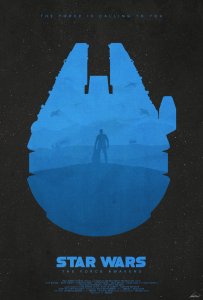 Brief Synopsis – In their search for the missing Luke Skywalker, the Rebel Alliance sends their best pilot on a daring mission in an attempt to find new clues to the Jedi Master’s whereabouts.

My Take on it – As you all probably already know, I’m a huge Star Wars fan and have seen all of the movies numerous times.

Since this film only came out two years ago, I have seen it only 5 times and really need to start watching it on a more regular basis in order to catch all of the nuances possible.

Regardless, I truly believe that this film does a wonderful job taking us back to the Galaxy Far Far Away and making us feel and believe that we are there right with the characters.

The new characters all work really well in this environment and are able to remind us of the great original characters who started this story 40 years ago yet also feel fresh and original enough.

The passing of the baton feeling is quite apparent and that is actually a great thing to have us witness over the course of the film.

The storyline itself also has dual purposes as it makes us, on the one hand, feel as if it is a rehash or remade of some of the events of the earlier films but on the other hand, still feels fresh, new and original and will take us places that we never expected.

The special effects are amazingly done and they do an wonderful job making the worlds that we encounter seem more “lived in” than the previous films were able to do due to the lack of technology.

John Willims once again gives us a great score that is a worthy addition to the already iconic scores of the first 6 films while keeping this still new and emotional.

I watched this film in anticipation of the next chapter which will come out next month, but I haven;t ruled out the possibility that I will watch this again before I go to see the new one so I’ll have it fresh in my memory at the time.

This is one of my favorite films from 2015 and I really can’t wait to see it yet again quite soon!

Bottom Line – Another great addition to the Star Wars franchise. The new characters all work really well in the context of the story and seem ready and eager to take the baton from the past trio of stars.  The story feels like both a remake and a brand new chapter rolled into one. It has the energy of the original trilogy that keeps things interesting the entire time no matter how many times one has seen the film. The special effects are amazing and give us an even crisper and more “lived in” than the previous films in many aspects. The story itself works and I liked the way that they kept connecting this chapter to events and ideas from the previous 6 films in the series. The music is superbly done by John Williams who has been able to once again add new groundbreaking and emotion music to his already grand score from the series.  Can’t wait to watch it once again right before the next installment comes out next month. Highly Highly Recommended!

MovieRob’s Favorite Trivia –  When Finn and Rey ask if he is THE Han Solo, the reply is “I used to be,” which is a reply Ford regularly uses when fans ask if he is Harrison Ford. (From IMDB)