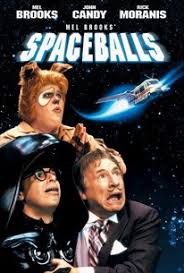 For this month’s next review for Genre Grandeur – Spoof/Parody Movies, here’s a review of Spaceballs (1987) by Ghezal of Ghezal Plus Movies

Thanks again to  Ashleigh of The Movie Oracle  for choosing this month’s genre.

Next month’s Genre has been chosen by Simon of Moustache Movie News and it is Road Trip Movies.

Please get me your submissions by the 25th of December by sending them to roadtripsimon@movierob.net

Try to think out of the box! Great choice Simon!

Let’s see what Ghezal thought of this movie:

When I think of some of my favourite spoof/parody movies, a handful of films immediately pop into my mind: the Austin Powers trilogy for one, the disgustingly brilliant Airplane! for another and the 1987 flawless spoof, Spaceballs directed by (and starring) the King of Parody, Mel Brooks.

Prior to the spoof genre becoming a collage of vomit-inducing terrible pop culture/film references from the year before (Meet The Spartans, Meet The Vampires, Meet The Insert-Popular-Trend-Here), the genre thrived from brilliantly creative minds taking tropes commonly associated with a particular film or genre and creating a separate,  exaggerated spoof/parody of it. When executed correctly, the end result is unabashedly hysterical and, in my opinion, Spaceballs does a phenomenal job at parodying the original Star Wars trilogy (and other sci-fi favourites) while also managing to flourish as its own property.

Yogurt, the Schwartz, Lone Starr, Princess Vespa, Dark Helmet – All of these parody the beloved associations we have with Star Wars and yet, because of how sharply written and established they are in this respective universe, they are ingrained in what Spaceballs is. A successful parody contains some semblance of seriousness or realism within their world even if a majority of its components are hyperbolized. Although the film possesses obvious comedic elements, every character is fully realized within the universe and real dangers are present as we watch our heroes escape evil – Barf (Candy) and Lone Starr (Pullman) are threatened by a thrown up Pizza the Hutt ffs! Hilarious, but these rascals are about to suffer some serious consequences if they don’t cough up the million space bucks Hutt is owed.

One simple sequence I’ve always appreciated follows Princess Vespa (Zuniga) as she flies away after escaping a life of tireditude with Prince Valium (stellar character name). The audience associates her hairdo with that of Princess Leia so when she takes the “hair” off, her hair reverts to the normal state with which it’s always in and the film moves on. This straightforward comical instance works with any audience, particularly those familiar with Star Wars and those who have never seen a Star Wars installment. When you manage to create a parody that satisfies the cravings of its intended audience without alienating any other potential viewers, you’ve got an incredibly well executed film on your hands.

I can honestly go on about Spaceballs ad infinitum. Its characters are delightful, the plot progresses at an enjoyable speed and the quotability… Calling Spaceballs a “quotable” movie does it a disservice. There is a line present for virtually any conversation you may have in your day-to-day life.

Friend: “Hey, have you found so and so?”

“He is my father’s brother’s nephew’s cousin’s former roommate.”

And these are just lines I quote on a daily basis. I am clearly the Major Asshole of my family. If you’ve never seen Spaceballs before, I cannot recommend it enough. If you have seen it, watch it again and you’ll have a newfound appreciation for its brilliance.

Thanks to MovieRob for this month’s Grand Grandeur. The spoof/parody genre is one of my favourites and I love talking about Spaceballs whenever I can. Thanks for reading! You can check out some of my work over at ghezalplusmovies.com and may the Schwartz be with you all.