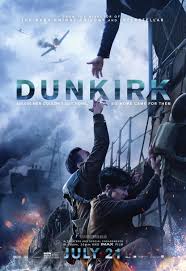 “Men my age dictate this war. Why should we be allowed to send our children to fight it? ” – Mr. Dawson

Brief Synopsis – The story of the evacuation (retreat) of the British forces from continental Europe in 1940 from the French town of Dunkirk.

My Take on it – This was a film that I ran to see on opening day in the theater and it was so amazing on the big screen that I was a bit concerned that it wouldn’t translate well enough to the small screen because of the grandeur of it all.

I’m so glad my fears were for naught.

Obviously most films with this kind of scope are amazing to watch on the big screen, but film makers nowadays make sure that they will also work extremely well no in the theater.

Director Christopher Nolan does an amazing job with this film and is able to deliver such a gripping story that is layered and also non-linear.

The fact that I now knew how to piece the story together actually helps make things even better because it adds to the tension and atmosphere of it all.

Nolan weaves all 3 storylines together really well and he jumps between them at nice intervals so that we can get a clear picture of everything that is going on.

The film is largely populated with unfamiliar faces which helps add to the realistic feeling of a long ago fought war, but it was still nice to see some known actors thrown in to the mix.

Kenneth Branagh, Mark Rylance and Tom Hardy are all spectacular here and each play their respective parts to the T.

Hardy’s role sounds too much like Bane the entire time, but I guess that could be expected. 🙂

The best character f the film tho is the story itself because it shows all the patriotic aspects of a war like this.

The ability to see this story from sea, air and land adds to the grand nature of it all.

The message of hope also reverberates throughout and each of the 3 storylines show the hope and patriotic feeling of the characters as they all seem to face odds that never seem to be in their favor yet they still persevere and move forward for the sake of their country pride and for the sake of their fellow countrymen.

The visual aspects of this film are all executed superbly and I especially was impressed with the cinematography and sound editing which were done so well.

Hopefully at least these two aspects of this film will get notice in the upcoming awards season.

I haven’t seen enough of the films getting buzz for Best Picture so, it’s too early for me to say whether this film is the best of the year, but it definitely deserves to be quite high on the list.

Even after having recently seen this, I can’t wait to see it again!

Bottom Line – Such an amazing way to tell this story. The non-linear way that Nolan tells this story adds so much to the tension and atmosphere of it all especially once you know how things fit together. The choice to populate most of the cast with unknown actors helps make this feel more realistic. That being said, it’s great to see Branagh, Rylance and Hardy here (eventhough he sounds like Bane the whole time). The visuals in this film are spectacular and the sound editing and cinematography will hopefully get a lot of notice during the upcoming awards season. The jury is still out by me as to whether this is the best film of the 2017, but it’s definitely close to being that. Highly Recommended!

MovieRob’s Favorite Trivia –  After first-hand accounts of the Dunkirk evacuation revealed to Christopher Nolan how young and inexperienced the soldiers were, he decided to cast young and unknown actors for the beach setting. (From IMDB)