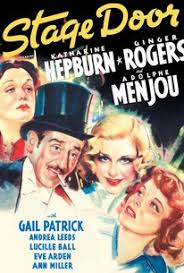 “When I get back to my room, you’re the only thing I want to find missing. ” – Jean

Brief Synopsis – Aspiring actresses living in a small boarding house all try to move through the politics of the trade while trying to become rich and famous.

My Take on it – This is a film that deals with certain subject matter that is unfortunately still very relevant even after 80 years.

There will always be women who travel far and wide and are willing to do just about anything to make it big and there will also always be powerful executives that will try and exploit them.

In the past few months, there are countless stories of this still happening in the film world and that proves how timeless a concept this film deals with.

Unfortunately, despite its premise, things just aren’t presented in an interesting enough way.

Katherine Hepburn and Ginger Rogers are both fine here but these are far from their best performances.

Adolph Menjou is perfectly cast as the sleazy executive trying to both get his plays made but also find the best female companion among the many choices presented to him.

It was nice seeing Lucille Ball and Eve Arden in small roles.

Bottom Line – Another Best Picture nominee that probably doesn’t meet the requirements for truly being among the best of the best.  Ironically (and sadly), some of the antics depicted here between producers and aspiring actresses is still relevant today more than 80 years later. Hepburn and Rogers are both fine here with Menjou playing the perfect executive. Nice seeing Ball and Arden in small roles.

MovieRob’s Favorite Trivia – When Katharine Hepburn delivered her climactic stage speech, Gregory La Cava reduced it to only ten lines and filmed it on a closed set. He later brought in the actors and the extras in the audience and had them react to the filmed speech. Many of them broke down. (From IMDB)