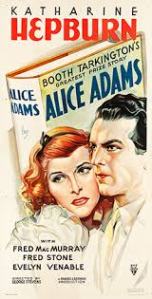 Brief Synopsis – A young woman from a poor family does all she can to try and climb the social ladder while still keeping her family’s poverty a secret.

My Take on it – I have always been a fan of both Fred MacMurray (from My Three Sons and numerous films) and of Katherine Hepburn but the fact that the two of them lack the right kind of chemistry in this film is what makes it less believable.

One would think that a romance would have characters who we could believe are truly in love but neither of them does enough to convince the audience that it is real.

There are a few humorous elements in the story that work and the added help of the side stories of Hepburn’s brother, mother and father who each have their own issues also make things a bit more interesting.

Unfortunately tho, the lack of chemistry between the leads and the fact that it all feels so predictable just makes it all feel so average.

Once again, another film that I don’t think should really be listed among the best of the best and am a bit baffled how this was chosen as a Best Picture Nominee.

Bottom Line – Interesting story that just doesn’t work as well as it probably could have. Hepburn and MaCMurray are missing the needed chemistry for their character’s relationship to be deemed realistic.  The side stories of Hepburn’s family members and their own problems helps make things a bit more interesting, but things come across as being a bit too predictable in the end.

MovieRob’s Favorite Trivia – There was a disagreement among Katharine Hepburn and George Stevens about the post-party scene. The script called for Hepburn to fall onto the bed and break into sobs, but Stevens wanted her to walk to the window and cry, with the rain falling outside. Hepburn could not produce the tears required, so she asked Stevens if she could do the scene as scripted. Stevens yelled furiously at Hepburn, which did the trick and the scene was filmed Stevens’ way, and Hepburn’s tears are real. (From IMDB)