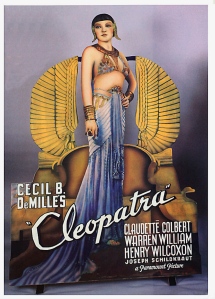 “So, a woman isn’t strong enough to help the mighty Caesar?” – Cleopatra

Brief Synopsis – The empress of Egypt aligns herself with Caesar and Marc Anthony in her quest for power.

My Take on it – This is a film that I knew the general story of but was even more interested in seeing how it would differ from the lavish remake of the story from thirty years later.

Each of the two films are quite distinct in their viewpoints of the events and it’s quite hard (and unfair) to compare them due to the great advances in film making during those three decades.

They do a nice job in this one of keeping the long story to a good runtime without seeming overbearing.

The alliances between Cleopatra and the two men of power in Rome works well and we can easily believe that she could love and align herself with these men for both political and romantic reasons.

Claudette Colbert is great in the title role because we can feel how powerful her character truly is in every scene based solely on her performance here.

Bottom Line – Nice production of the long story of Cleopatra’s alliances and relationships with both men of power in Rome. The story works quite well and we believe the political and romantic alliances as we get to see rulers who want power over everything that they can. Colbert is great in the title role.  It’s best not to compare this to the lavish production made almost 30 years later because both are great in their own eras based solely on the possibilities at the time. Recommended!

MovieRob’s Favorite Trivia – In 1934 the Hays Code was only just being implemented so Cecil B. DeMille made sure to flaunt its restrictions while he was still legally able to do so. He opens the film with an apparently naked but strategically lit slave girl holding an incense burner in each hand as the title appears onscreen. (From IMDB)