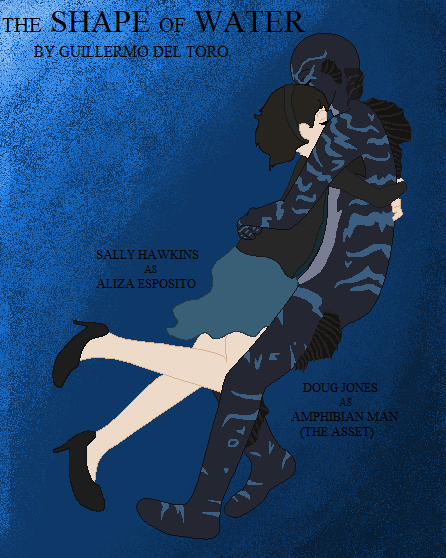 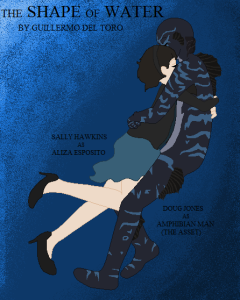 Brief Synopsis – During the Cold War, a young cleaner in a top secret facility befriends a creature that is being used for experiments.

My Take on it – When it comes to directors that can always be counted on, Guillermo Del Toro is among the highest on the list.

In this film, he is able to take a story that could conceivably occur in our world and add other worldly characteristics to it which allow s to rise above anything most people would expect.

The cast in this movie is superb with Richard Jenkins, Doug Jones, Michael Shannon and Octavia Spencer all giving amazing performances.

The film is led tho by the unbelievable performance of Sally Hawkins, who’s character doesn’t say a word throughout the entire film.

She acts it all out as if she was in a silent movie and it’s a superb performance that very few actors would probably be able to match, if not top no matter how hard they try.

All of the main characters in this film are ‘minority’ characters and that helps elevate the story to another level.

This film reminded me a lot of E.T.: The Extraterrestrial (1982) in its story and message, but obviously this has a much more adult perspective on it all.

This is a great love story that really gives us an interesting take on the idea yet it also keeps the sci-fi aspects of it all really interesting, thrilling and gripping all at the same time.

Bottom Line – Great love story because it is able to do such an amazing job showing us how it’s possible for such a story to occur using sci-fi. Hawkins is superb in the lead and does a wonderful job especially since she doesn’t say a single word. The use of ‘minorities’ in the story helps make the story even more powerful. In some ways this film is reminiscent of E.T.: The Extraterrestrial (1982), but from an adult perspective instead of a kids. Del Toro is an amazing writer and director and is always able to give us some great stories set in the real world but filled with otherworldly characteristics. One of the Best films of 2017 IMHO. Highly Recommended!

MovieRob’s Favorite Trivia – Director Guillermo del Toro said about Sally Hawkins, “Not only was she the first choice, she was the only choice. I wrote the movie for Sally, I wrote the movie for Michael [Shannon]… Sally is, I wanted the character of Elisa to be beautiful, in her own way, not in a way that is like a perfume commercial kind of way. That you could believe that this character, this woman would be sitting next to you on the bus. But at the same time she would have a luminosity, a beauty, almost magical, ethereal.” (From IMDB)