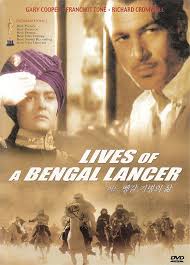 “We have ways to make men talk” – Mohammed Khan

Brief Synopsis – Three very different British Officers must deal with be stationed in India during the era of the British Raj.

My Take on it – This is a film that gives us a lot of insight into the way things were done during the British rule in India.

The life of Officers stationed there was not simple and this film gives us numerous perspectives on how they try to use their own skills and strengths to help them during this trying time.

The cast is very good and Gary Cooper, Franchot Tone and Richard Cromwell are all enjoyable to watch because they play each of the personalities of the characters so differently.

The action in this film is ok, but when taking into consideration when this was made, it is passable.

They also give us a really nice view of how the politics of the time was a major force in decision making even when not necessarily the most sound.

There are unfortunately too many scenes in the middle that drag on a bit too much and would have benefited by a tighter edit.

Bottom Line – Nicely done film that gives us an interesting perspective on the way of life of British Officers who fought for the Empire in far away India. Cooper, Tone and Cromwell are all enjoyable to watch because they play such diverse characters.  The action is ok for a film from the 1930’s and we get a nice view of much of the politics of the time.  There are unfortunately too many scenes that drag on too much and are borderline boring tho and eventhough this film isn’t so long, it could have been edited much more tightly.  Recommended!