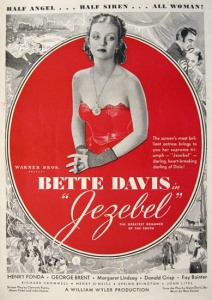 “I’m askin’ for the chance to prove I can be brave and strong and unselfish. Help me, Amy. Help me make myself clean again as you are clean. Let me prove myself worthy of the love I bear him.” – Julie

Brief Synopsis – A young Southern Belle who wants to feel independent, decides to go to the local ball in inappropriate attire in order to prove how headstrong she can be, even-though her fiancee is meant to be present.

My Take on it – This is a film that is perceived to be much better than it really is due to its great performances which overshadow the story and plot which aren’t as stable.

The plot moves along at a super-slow pace and has trouble remaining interesting the entire time.

Both Bette Davis and Fay Bainter won Oscars for their respective roles here and (as always) Henry Fonda also gives us a great performance.

This film doesn’t have much else going for it, but I really enjoyed the way that they explain how Davis’ character is in effect a ‘Jezebel’ and doesn’t necessarily act as a Southern lady really should because she wants to show how much she can really think for herself and be as prideful as possible along the way.

Bottom Line – Story that doesn’t work as well as it might have. The performances are quite good, but the story moves along too slowly. Davis and Bainter both won Oscars for their roles and Fonda is quite good here too (as he usually was).  One of the best things about this film is the characterization of Davis’ character as a Jezebel because it comes across really well.

MovieRob’s Favorite Trivia – Bette Davis came to the realization that William Wyler was a very special director when he insisted she come view the dailies with him, something she had never done with any other director before. They watched a scene where her character was coming down a staircase, a scene that had really irritated Davis as she couldn’t understand why Wyler wanted to film it over 30 times. Watching the rushes however, she saw one of the takes in which he had captured a fleeting, devil-may-care expression that summed her character up perfectly. After that, she happily accepted however many takes Wyler wanted. (From IMDB)