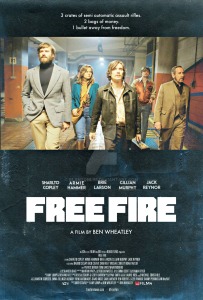 “That’s what I like about this business. It could be financially rewarding and you can still learn something new everyday. ” – Ord

Brief Synopsis – Two gangs meet up for a secret deal in a warehouse where things end up going terribly wrong.

My Take on it – This is a film that my good friend Jay from Life Vs. Film and the Head Shepard at The LAMB recently recommended to me to watch.

I knew absolutely nothing about it going in and that helped me enjoy it even more because it allowed me to constantly be surprised by everything going on.

The premise here is simple yet it is done amazingly because it is able to drag out the story for 90 minutes without it feeling repetitive at all.

The cast is great and even the well known actors among them are largely unrecognizable (mostly due to some kind of facial hair.)

The genius of this film is the fact that it constantly reinvents itself and continues to surprise as things move along and somehow keeps things both gripping and thrilling the entire way through despite it all.

Nothing is a ‘given’ from the start and none of the characters have some kind of immunity around them.

The dialogue is also constructed really well because even though most of the film’s dialogue is just characters shouting at one another, the insults that are conceived here are usually quite clever and in some instances outright hilarious.

My initial reaction to this film was that is was too long, but upon further reflection over the past two days, I’ve come to realize that the length is perfect because it gives the characters time to try and save themselves from themselves.

Instead of the way most action films deal with shootouts, they give us an opportunity to watch one largely compromised of non-professional gangsters who let emotion get in the way of professionalism.

This is a film that I’m gonna have to watch again to fully be able to take in all that it offers.

Bottom Line – Great premise that is done quite well despite the fact that the story is dragged out too much yet doesn’t fall into the trap of feeling repetitious. The cast is great since most are completely unrecognizable despite some of them being well known. The genius of this film is the constant surprises as things move along. They manage to keep things somewhat realistic while showing how incompetent most of the characters are which leads to some humorous situations. Highly Recommended!

MovieRob’s Favorite Trivia – Armie Hammer said that police appeared on set during the second day of shooting following calls of concern from members of the public in nearby shops having heard gun shots. (From IMDB)