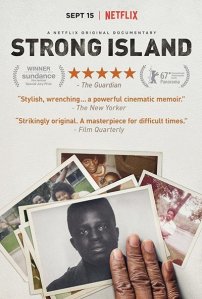 “How do you measure the distance of reasonable fear?” – Yance Ford

Brief Synopsis – A look at the murder of the brother of the filmmaker 25 years ago and how the judicial system failed to bring his murderer to trial.

My Take on it – This is a film that actually surprised most people when it was nominated for an Oscar for Best Documentary earlier this week.

Since I try to watch as many of the nominees as possible, I decided to check this one out after reading the synopsis.

I am a HUGE fan of Kurt Kuenne’s documentary Dear Zachary: A Letter to a Son About His Father (2008) and real crime film, especially when done from a personal perspective are usually right up my alley.

This film does a wonderful job us giving us unique insight into the way that the system is suppose to work and unfortunately sometimes the system fails to work properly and creates injustices instead.

The question this film tries to ask is whether this case falls into that category or not.

Is it due a flawed system? Is it do to racial prejudice or perhaps it’s something else altogether.

The journey through this interesting story is enjoyable and scary all at the same time.

Since this documentary is shown from a very intimate and personal perspective, it slowly gives us information about the case as we also learn about it all bit by bit.

The questions asked are great and although there will never be a definitive answer on most of them, the fact that they are out there helps open up the debate on the subject.

This film shows interviews with friends, family members and even the director that help try and shed light on the events leading up to the incident and its aftermath and leaves us with so many questions to ponder about it all.

This film definitely deserves its Oscar nomination despite the fact that most people don’t think that the odds are in its favor to walk away with a win, but as we all have seen in the past, Oscars can sometimes be unpredictable and this film might just surprise.

Bottom Line – Great film that gives us unique insight into how the system sometimes fails and causes injustice. The documentary is quite personal and intimate and asks many pertinent questions that there will never be real answers to help prove the truth.  The interviews with friends, family and even the director helps us understand what happened and gives us so much to ponder.  Definitely deserving of its Oscar Nomination for Best Documentary eventhough the odds are not in its favor to walk away with a win, but anything can happen.  Recommended!