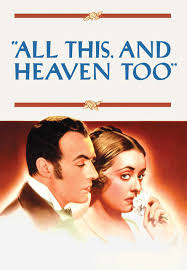 “Happiness isn’t a little cake which we can cut up to fill our appetites.” – Henriette Deluzy-Desportes

Brief Synopsis – A governess of the children of a French Duke is treated poorly by the Duke’s wife and after events get out of control, everyone’s life will be changed forever.

My Take on it – This is a story that is somewhat based on a true tale of jealousy and anger in the house of a French Duke and Duchess in the middle of the 19th Century.

Bette Davis is quite good in the lead role and allows us to understand her character’s plight yet the story itself moves too slowly for its own good.

The pace is super slow and there are lots of scenes that could have been cut down to make it more interesting since the premise has a lot of potential.

The premise itself is quite timeless and they get the feelings of the character right most of the time.

This film was nominated for three Oscar that year; Picture, Supporting Actress, Cinematography but wasn’t able to win any of them.

This, of course doesn’t surprise me since it wasn’t among the best of that years ‘crop’.

Bottom Line – Davis is quite good here, but the story itself drags a bit too much and the slow pace of it all makes one lose interest along the way. The premise itself is quite timeless tho and the fact that it is somewhat based on truth makes for a compelling idea yet it unfortunately needs to be edited down a bit in order to be even more interesting. Was nominated for three Oscars that year, Picture, Supporting Actress and Cinematography but didn’t win any of them.

MovieRob’s Favorite Trivia – The word “mademoiselle” is uttered 615 times throughout the film, a Guinness World Record.  (From IMDB)