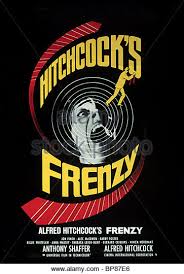 For this month’s final review for Genre Grandeur – Hitchcockian Films, here’s a review of Frenzy (1972) by Michael Eddy

Thanks again to Michael Eddy for choosing this month’s genre.

In addition, I watched and reviewed 8 movies for my companion series Genre Guesstimation.  Unfortunately none of them will now be considered among my favorites of the genre (despite a few coming quite close).

Next month’s Genre has been chosen by Vinnie of Vinnie H. and it is Historical True Story Films.

Hitchcock’s penultimate film was “FRENZY” – made in 1972. Probably not considered one of his masterworks – it is nevertheless, a very gripping murder tale made by the Master at the end of his career. Based on a real life UK serial killer who bore similarities to Jack The Ripper (his targets were prostitutes and he stopped killing before he was ever apprehended) – it follows the carnage left by a killer known as “The Necktie Murderer” because he strangles his victims with neckties that he leaves behind, knotted around their throats.

In a British cast, largely devoid of “name” actors (more on this in a minute) – Jon Finch plays Richard Blaney, a down on his luck ex-soldier, divorced from his wife Brenda (played by Barbara Leigh-Hunt) who now runs a very successful lonely hearts business as a matchmaker (sort of the 1972 version of Match.com before the internet). Her assistant is Jean Marsh (of “Upstairs, Downstairs”) as a prickly woman who probably harbors a distaste for men in general, making her the exact wrong person for the job of screening applicants looking for love. Blaney maintains a nice relationship with his ex-, who still has feelings for him, but can’t be married to him any longer, but is not averse to loaning him money until he can get back on his feet financially.

Through twists and circumstance – Blaney – following in the well trodden footsteps of Hitchcock heroes wrongly accused – becomes a suspect in the neck tie murders – after his ex- his found dead in her office – a victim of the serial killer – and Blaney was the last person seen with her. He goes on the run – to the only friends he can trust – a woman he’s dating – “Babs” Milligan, played by Anna Massey (the daughter of Raymond Massey) and his old air force chum – Robert Rusk – well-played by Jon Finch – who manages the Covent Garden fruit and vegetable market, where he shares an apartment with his red-haired Mum.

With the police closing their net, Blaney is forced to go from ally to ally – in an ever dwindling circle – as even his friends begin to suspect him as being the true killer – and hide out in one place after another – desperate to stay beyond the grasp of the law while he tries to solve the case himself – knowing that he’s innocent – but knowing that once jailed – he’ll never be able to prove it. This film has more than the requisite number of Hitchcock touches (from his cameo at an early murder scene) to some clever twists and turns throughout. even when not playing in peak form, Hitchcock still knew how to weave a tight web.

As promised earlier – some interesting trivia on this one. This is the only movie Hitchcock ever made to have nudity. Back in 1960, when he did Psycho, it was verbotten, even though he was able to shoot the infamous shower scene without it – and only make you think you saw things you did not – and would have loved to film the opening afternoon tryst with John Gavin and Janet Leigh, with Leigh topless rather than in a bra. The nudity garnered Frenzy an X rating in the UK.

The role of Rusk was offered to Michael Caine – who turned it down – saying he thought the character was “disgusting”. And Helen Mirren was Hitchcock’s 1st choice to play “Babs” Milligan – Blaney’s trusted girlfriend – but she passed as well. Although years later, she admitted that she regretted doing so. In a strange twist – Mirren ended up playing Alma Reville Hitchcock – Sir Alfred’s real wife – in “Hitchcock”, opposite Anthony Hopkins in the title role. And lastly, I was actually able to see this film while I was in film school, when Mr. Hitchcock brought it to one of my classes. And I was able to get his autograph and shake his hand in what was then, and still is, one of the thrills of my life.