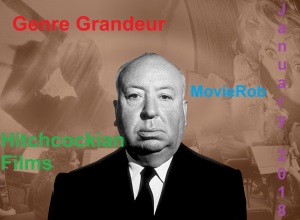 For this month’s next review for Genre Grandeur – Hitchcockian Films, here’s a review of Vertigo (1958) by Michael Eddy

Thanks again to Michael Eddy for choosing this month’s genre.

Next month’s Genre has been chosen by Vinnie of Vinnie H. and it is Historical True Story Films.

A British movie publication, which every decade chooses the greatest movies of all time, recently replaced perennial powerhouse #1 “CITIZN KANE” – with Alfred Hitchcock’s “VERTIGO”. For me – film is too subjective too choose “bests” – but it does make for a lively debate. That said – Vertigo is a superb piece of stylistic moviemaking – and when done by Hitchcock – it would certainly make many best of lists – certainly – even amongst his own list of movies.

Vertigo is one of his more dark and erotic thrillers. It’s based on a French novel and the story is at once twisty and straightforward. It stars another Hitchcock stalwart – James Stewart – who plays a San Francisco detective named Scottie Ferguson. When the film opens, he’s on the force and involved (with a uniformed cop) in pursuit of a criminal trying to escape across a series of rooftops. Leaping from one to the next, Stewart misses his mark and is left clinging to the side of a building many stories in the air. The criminal escapes and the cop, who comes back to help him, dies when he plunges to the ground – traumatizing Ferguson, who develops an acute case of vertigo (fear of heights) and retires from the force. .

He’s asked by a friend, to tail his wife – who is a suicidal neurotic – to prevent her from killing herslf. While doing so, he begins to fall in love with the woman – saving her once when she plunges into the water blow the Golden Gate Bridge – but the next time – when she races up a staircase at an old monastery, his vertigo prevents him from being able to follow – and he watches helplessly as she plunges to her death from a bell tower. His guilt at failing to prevent the suicide drives him to a nervous breakdown.

Following a lengthy recovery period – he stumbles across another woman who bears a remarkable resemblance to the dead woman – dark-haired rather than blond – a shop girl. He pursues her, fascinated by her, falling in love with her as well – and in some sick twisted almost necrophiliac fashion – convinces her (against her better judgment) to remake herself into the exact image of the dead woman. Stewart is remarkable in his ability to get the audience to stick with him even though what he’s doing is quite dark and relentlessly off kilter. The 2 women are both played by Kim Novak – in probably the best role(s) of her career.  Her shop girl, Judy, is at once vulnerable, sexy and angry at being forced to be remade in the image of a dead woman. She desperately wants Scottie to love her for herself, and not for who he wants her to be. She fights his impulses to alter her physically – but bit by bit – culminated in dying her hair blond and wearing it in the signature bun that the dead Madeleine did, she eventually transforms herself into the exact, almost ghostly, back from the dead visage of his friend’s dead wife.

It’s here that the Hitchcock magic takes over – as SPOILER ALERT: Judy turns out to be not just the “reincarnated” doppleganger of Madeleine – but Madeleine herself. They are one and the same. Judy having been hired early on to impersonate Scottie’s friend’s wife in order to facilitate a murder plot. It’s Judy’s refusal to rid herself of a certain item of jewelry that unravels things for the former detective.

Not that Hitchcock’s other movies are ever light and frothy – but he always finds room for some sort of comic relief. Not heree. This is an unrelentingly dark tale and Stewart and Novak are both very effective. It will leave you gasping – more than once – and the ending, sudden and impactful, will leave you wrung out. This one is truly the master at work.