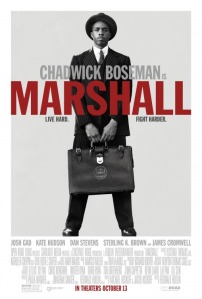 “I wouldn’t be here if I didn’t think we could win.” – Thurgood Marshall

Brief Synopsis – In 1940, a young black lawyer for the NAACP partners with a Jewish lawyer in Connecticut to defend a black man accused of raping his white employer.

My Take on it – This is another film that I’ve been meaning to see in order to try and complete my Oscar ‘list’ before the Award show in a month.

This film only has one nomination (for Best Original Song – Stand Up for Something by Common and Dianne Warren).

The story itself is quite interesting and knowing that it’s based on a true event makes it even more poignant to watch.

The message about prejudice in the North is quite powerful because it deals with how minorities dealt with life in those states even during a time when we all expect things to have calmed down.

I liked the way that this film doesn’t shy away from showing how open people were at that time about these issues.

Many people have praised Chadwick Boseman’s performance in this film, but I think Josh Gad is able to actually outshine him in many of his scenes because his character is more vulnerable and unsure of himself.  This is further proof that Gad has so much more to give us and keeps showing us how great an actor he can be.

They do the courtroom scenes quite well and keep things moving the whole time while still getting of clear picture of what is truly happening.

This is a film that is quite good, but seems to feel as if something is missing (or even held back) that would make it an even better story.

Bottom Line – Very interesting true story that is quite poignant and has a powerful message about tolerance in the North during the 1940’s.  Boseman is fine here but Gad once again proves how great an actor he can be.  The courtroom scenes are done really well and we get a clear picture of the way things works in America during that time period when it comes to prejudice.  Despite being quite good, it’s still missing something that would have made it even better. Recommended!

MovieRob’s Favorite Trivia – The synagogue that Sam Friedman is shown attending with his family is called Temple Rodef Shalom. “Rodef shalom” is Hebrew and means “pursuer of peace.” The Talmud applies this label to a person who stands for justice, as Friedman’s character does in this movie. (From IMDB)