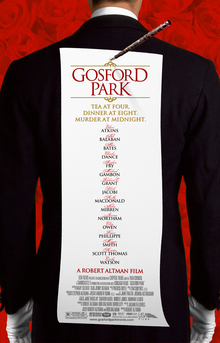 Brief Synopsis –During a lavish party on an English estate in the 1930’s, the servants and high society guests go about their business separately until something happens that brings them all together.

My Take on it – I saw this film when it was in the theater and really enjoyed it back then which made me look forward to finally getting a chance to rewatch it.

This film has a great premise which works so well.

The way it examines the class structure in England during the 1930’s is great and it says so much about the wya people lived back then.

This film has an amazing cast and in retrospect is quite impressive that they could get so many famous actors and actresses to agree to work on such a film where none of them can really be considered the lead in it.

The fact that the main cast is so large also has its drawbacks since it sometimes gets a bit confusing as to who is who and it also significantly reduces prominent screen time of any of the characters.

Director Robert Altman loved having his characters talk over one another in his films and this one is no exception to that.

This actually gives this story an even more genuine feel due to it because it wouldn’t make sense for so many people having pauses in their conversations so we could hear the others.

This film was nominated for 7 Oscars and won the award it truly deserved and that was the one for Best Screenplay.

The writer of this film was Julian Fellowes who would go on to write the TV show Downtown Abbey a few years ;later which also dealt with the same kind of idea of differences in the social classes in English society.

Bottom Line – Great idea that works quite well. The separation of classes in this film is quite prominent and says so much about how society was lived back then. The cast is superb but with so many characters things get slightly confusing and the result also is that there isn’t really enough screen time for any of them. Loved the way that Altman has his characters talk over one another all the time because it gives the story a feel of being more genuine.  Was nominated for 7 Oscars but won the one that it truly deserved – Best Original Screenplay for Julian Fellowes who went on to create Downtown Abbey a few years later which looks at the same ideas of class in English society. Recommended!

MovieRob’s Favorite Trivia – During group scenes, director Robert Altman had two cameras going at all times, moving about (out of each other’s shot, of course). His intention was to prevent the actors from acting to the camera but instead to play the scene more naturalistically. (From IMDB)