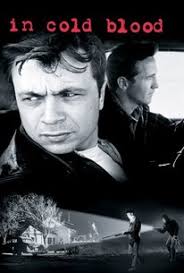 For this month’s next review for Genre Grandeur – Historical True Story Films, here’s a review of In Cold Blood (1967) by Michael Eddy

This film, based on the novel by Truman Capote, screenplay adaptation by Richard Brooks, who also directed the film – is the true story of the senseless slaughter of an entire Kansas farming family – the Clutters – father Herb, mother Bonnie, son Kenyon and daughter Nancy – by  ex-cons – one of whom, while in prison, had mistakenly fallen for a story about a rich Kansas farmer who had a safe in his house full of money. The two ex-cons and drifters invaded the home in the dead of night – their mantra being leave no living witnesses – and killed the family – for what turned out to be a radio and $43.00 in cash.

The story went national and caught the attention of Truman Capote, living in New York, who traveled to Holcomb, Kansas (along with his boyhood friend, Harper Lee who had written “To Kill A Mockingbird”) where he gained access to all the principals – the FBI investigators, local law enforcement, the people of the town – friends of the Clutter family, schoolmates of Kenyon and Nancy. He spent months there and what came from it was the novel “In Cold Blood” – which was one of the first of its kind – a work of non-fiction which read like a work of fiction. It was a bestseller and turned into a film by the esteemed Richard Brooks writer/director of such films as Blackboard Jungle, Cat On A Hot Tin Roof, The Professionals, Elmer Gantry, Sweet Bird of Youth and Lord Jim.

Brooks shot the film in black and white (to preserve the starkness of the area and the story itself) and in the actual locations – including the Clutter home – where the murders took place, the Finney County Courthouse in Garden City, Kansas where the trial took place and the Colorado Territorial Correctional Facility (prison) where Smith and Hickock were kept on death row through their appeals and where they eventually went to the gallows. Casting was done with actors who actually bore a strong resemblance to the people they portrayed – including all the Clutters – which created an eerie and frightening effect. This included the two actors – Robert Blake and Scott Wilson – who played the two killers – Perry Smith and Dick Hickok respectively. Some of their individual back stories are filled in via flashbacks and the lead up to the carnage that happens is told in some detail. Using Capote’s work (which was quite effective as he befriended the two while writing his book, and followed them through their capture, trial, incarceration on death row, and their hangings for the crime), Brooks does a superb job at recreating it all, including the actual murders. It is a brilliant telling of the story – from multiple points of view – the victims, the killers, and law enforcement (primarily the lead FBI investigator on the case, Alvin Dewey, well played by John Forsythe). It’s frightening and touches on the psychological aspects of the killers and as a viewer – the fear generated by being in that house as it all unfolds is palpable. It is a genuinely masterful piece of film-making – which garnered Oscar Nominations for Brooks as both writer and director, along with nominations for the black and white cinematography of Conrad L. Hall and the score by the legendary Quincy Jones (none of them won). Both Blake and Wilson, doing the best work of their acting lives, were so seamless and scary and real as the two killers, but were both overlooked for acting nominations. I can only think that they were too good at their jobs, if that’s possible. Brooks interpretation of the story was almost documentary-like in the way he told it.

As far as true stories put to film – this is one of the very best I have ever seen. Made in 1967, it is a piece preserved in amber, of a time and a place and a story told like putting puzzle pieces together – a horrendous outcome which may have had a wholly different outcome had not every piece fit just so. It makes you wonder about fate and the frailty of life. And how two people – individually troubled enough – who, when put together, become a third entity – dangerous and combustible and murderous. This is not an easy one to watch – but it is a primer on how to tell a true story – even if the subject matter makes you want to look away.