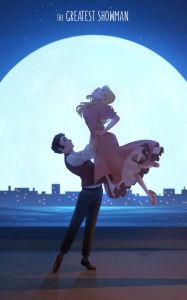 “No one ever made a difference by being like everyone else. ” – PT Barnum

Brief Synopsis – A young pauper with nothing but ideas ends up creating one of the greatest platforms for showcasing extraordinary and unique talents.

My Take on it – I try to make it a yearly endeavor to watch all of the Oscar nominated films (in the regular (non-documentary, non-animated or foreign language) categories before the yearly awards ceremony.

This year, I managed to watch all of them besides 2 – this film and All the Money in the World (2017) and I was quite disappointed in myself.

Thankfully, I made an effort to see this film the morning before the show, so this year, I only have one outstanding film unwatched before the Oscars.

I was blown away with this film and was so exhilarated by it.

The music and choreography are amazing and they make this film stand out and it can be considered among one of the best of its genre.

The story is heartwarming and filled with a great message that resonates throughout.

The songs in the film are extremely powerful and I’m actually surprised that this film only got one Oscar Nomination for the song – This is Me.

It is by far the best of the 5 nominated songs and hopefully it will win tonight just as it did at the Globes in January.

Hugh Jackman is great in the lead here and he has once again helped create another leading man in a musical that we can all love.

This is based on truth, but the question remains as to how close or far from the truth this really is.

Regardless, it makes for an amazing and wondrous storytelling.

This film didn’t do as well as it probably should have at the box office which surprises me a bit.

In the meantime, I now have the soundtrack and can’t stop listening to these amazing songs over and over.

Bottom Line – Such an exhilarating film. The music and choreography make this film stand out as being among the best ever made.  The songs are very powerful and I’m surprised only one got an Oscar nomination.  Hopefully it will win because it is by far the best of the 5 nominees. [I didn’t 😦 ]. Jackman is great in the lead and has helped create another musical leading man we can all love.  Not sure how much of this is true, but it makes for amazing and wondrous storytelling.  Unfortunate that this film didn’t do as well as it should have.  It is one of the best films of 2017 IMHO and I can’t wait to see it again. Highly Recommended!

MovieRob’s Favorite Trivia – The Greatest Showman (2017) features eleven new songs written by Benj Pasek and Justin Paul, the Academy Award winning lyricists of La La Land (2016). From early on in pre-production on the film, the decision was made to have the musical style to evoke more that of contemporary musical genres like pop and hip hop rather than that of a traditional, classical musical style that would accurately evoke the film’s 1800s setting. As Pasek said, “The choice was to express not just the characters’ feelings, but also how ahead of his time P.T. Barnum was. He wasn’t bound by the world in which he lived; he wanted to create one.” (From IMDB)