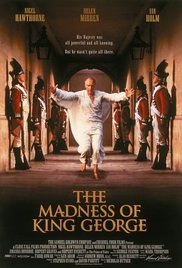 Brief Synopsis – When the advisor of King George III seem to think he has gone insane, they all try to hide it from the public while still finding ways to continue running the country.

My Take on it – This is a very interesting film that is able to give us a unique perspective on the events surrounding the days when the King of England seemed to have loat his mind not long after the loss in the American Revolutionary War.

The lead role is played expertly by Nigel Hawthorne and he is able to capture both the sane and insane personalities of the former King of England.

He received his sole Oscar nomination for this performance and its largely due to the way he makes the character seem so genuine the whole time.

There are parts of this film that move along a bit too slowly but overall it is all put together really well.

Loved the way that they portray the way politics were practiced in those days.

Bottom Line – Interesting film that gives us a rare view of what possibly happened when the Monarchy of England lost his mind not long after they lost the Revolutionary War. Hawthorne is quite memorable in the lead role and does a wonderful job keeping things seem realistic.  Parts of the film move along a bit too slowly, but it still is put together so well that it remains both interesting and entertaining.  Hawthorne definitely deserved his Best Actor nomination for this role. Love the way that they portray the internal politics of the day. Recommended!

MovieRob’s Favorite Trivia – For this film, Nigel Hawthorne became the first openly gay actor nominated for an Academy Award. (Other actors who later admitted or were later confirmed to have been gay had been previously nominated, but he was the first actor who was already “out” at the time.) He then became frustrated that this was all the American interviewers wanted to discuss, rather than the film or the nomination itself. (From IMDB)