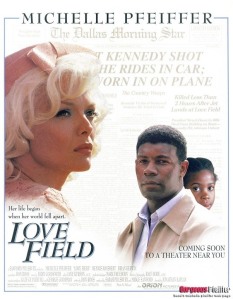 “I don’t know when we started killing people to solve things.” – Mrs. Enright

Brief Synopsis – In November 1963, a young woman living in Dallas and strongly affected by the assassination of Kennedy decides to travel to his funeral in Washington. Along the way, she meets a black man and his daughter which changes their lives forever.

My Take on it – This is a film that I had heard about years ago and the fact that Michelle Pfeiffer was nominated for an Oscar for Best Actress for this role has always made me curious as to what it is all about.

The premise of this film is great but they handle the story with kid gloves and instead of a powerful film about racism in the early 60’s in the South it comes across as being just too tame for its own good.

Pfeiffer is quite good in the lead here, but she feels too limited by the way that the script is written.

Given all this, I’m a bit surprised that Pfeiffer got a Best Actress nomination for a ‘potentially’ powerful role.

This film does an ok job dealing with racism at the time since things were still in process of changing.

I liked the way that each of the characters have differing views on the subject and we can see how their views affect their lives.

Dennis Haysbert, who was largely unknown at the time that he made this film, also does an ok job with his role here but he too feels limited by the scriot which tries too hard to be tame instead of powerful.

Bottom Line – Great premise but just isn’t as powerful as a story like this should be Pfeiffer is quite good here, but she feels limited by the script which tries to be too tame for its own good. This film deals with issues of racism at a time when things were just beginning to change and the different characters attitudes towards those changes are apparent as the story moves along. Haysbert who was largely unknown at that point does a fine job but again, the script limits the characters too much.

MovieRob’s Favorite Trivia – Although made in 1990, this movie sat on a shelf until a recently resuscitated Orion Pictures released the film in December 1992 to qualify the picture for Academy Awards consideration. (From IMDB)