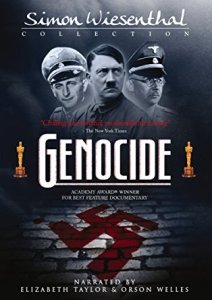 “Small wonder then, that the 9.5 million Jews who still lived in Europe at the end of the First World War looked forward with great hope to the new world, the world of Democratic Europe, the world President Wilson promised would be made safe for democracy. ” – Narrator

Brief Synopsis – Documentary that chronicles the German Socialist party’s rise to power following World War II and their insistence on destroying the Jews.

My Take on it – This is a film that I’ve wanted to see for years and only was able to find a copy of recently.

This is such a vast subject and it would take years upon years to chronicle all of the events that happened and this film is able to give people a concise general overview of the Holocaust while at the same time we never feel as if no general information is missing.

The choice to have two narrators works really well and both Orson Welles and Elizabeth Taylor are great in this co-role.

The interviews are quite fascinating to watch and the fact that this film tells us numerous personal stories says so much about the thriving Jewish community of Europe at the time and the absolute fear that these people had of their German oppressors.

The number of stories told here are just the very tiny tip of the iceberg when it comes to trying to learn so much about these people who were shamed, beaten and ultimately decimated by the German war machine.

This film was truly deserving of it’s Oscar win for Best Documentary and it will now be among my top ten of 182 because it is so riveting to watch.

Bottom Line – Amazing documentary that is able to give us an informative overview about the Holocaust without it feeling as if anything is missing.  The choice to have co-narrators was a great one and both Welles and Taylor are superb.  The interviews are fascinating to watch and the number of stories told says so much about the Jewish culture at the time even if this film only manages to touch the tip of the iceberg.  Truly deserving of an Oscar for Best Doumentary. Highly Highly Recommended!

MovieRob’s Favorite Trivia – The film was originally designed to be presented in a multi-screen format at a Los Angeles museum, with one 35mm projector, two 16mm projectors, and 18 slide projectors. Only after completion was it reformatted to be shown in standard film theaters. (From IMDB)