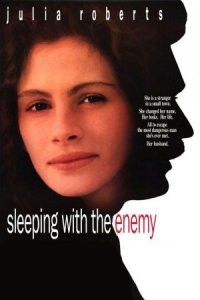 Brief Synopsis – An abused wife fakes her own death in order to escape her husband.

My Take on it – This is a film that actually surprised my wife that I had never seen before.

I had heard about it, but never had the chance to see what it was all about.

The premise itself is both interesting and clever yet over the 27 years since this came out, the idea has been overdone and nothing really feels original enough in the storyline.

Julia Roberts is fine ion the lead here, but this is not even close to being among her best performances.

After her breakout in Pretty Woman (1990), it’s not surprising that Roberts would be a hot commodity, but she doesn’t stand out here as much as one would hope she could in such a role.

Patrick Bergin is quite ineffective as the stalker husband because despite his mustache, he doesn’t feel menacing enough to seem comfortable in the role.

This hampers many of his key scenes because instead of them being scary or thrilling, they come across as more humorous than they should in such a film.

The rest of the cast is pretty mediocre.

The story itself doesn’t come across as thrilling enough and the predictability of it all also takes away from the suspense that one would expect from a film like this.

There are a bit too many plot holes that also take away from the effectiveness of it all.

Bottom Line – Interesting and clever premise that has been slightly overdone over the years. Roberts does a fine job in the lead, but I wouldn’t say that this is anywhere near her best performance. Bergin isn’t effective (and menacing) enough for the role he is given and some of the scenes come across as humorous instead of scary.

MovieRob’s Favorite Trivia – Julia Roberts caused a controversy after she left Abbeville, South Carolina, where the film shot some location work. She said the place was “a living hell” and a “horribly racist” town and she would never return there. (From IMDB)