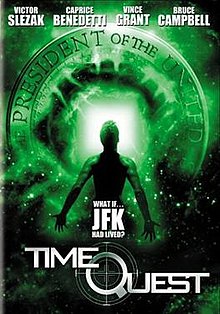 Brief Synopsis – A time traveler from the future appears to John F. Kennedy on the day of his assassination in order to prevent the event from happening.

My Take on it – I have always been a fan of conspiracy theory movies and especially of those dealing with the JFK assassination on 23 Nov 1963.

This film adds in a great twist and uses time travel to create a really interesting alternate history of what would have happened if the assassination had possibly never took place.

They really did a lot of research here because it’s clear to see how they took close care to keep things close to the truth even as they “branch” the story out into new and fascinating directions based on a “what if??”

The cast of this film is largely unknown and it’s easy to see that this is a low budget film.

Despite this, it was nice and fun to see both Bruce Campbell and Ralph Waite in pivotal roles despite the budgetary constraints.

They also do a great job finding ways to still “touch” upon famous people and events from our timeline and show us how they would have occurred in this alternate timeline.

Bottom Line – Such a great “alternate” history film. They take so much care to try and keep things close to the truth as they branch the story out from what happened and what “could have happened.” The cast is largely unknown because this is clearly a low budget film, but it was fun seeing both Bruce Campbell and Ralph Waite in pivotal roles.  Liked the way that they find ways to still “touch” upon famous people and events and how they would have appeared in this new “timeline”.  Film feels a bit too short and it could have been even better if it would have been slightly longer. Recommended!