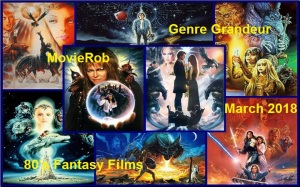 For this month’s next review for Genre Grandeur – 80’s Fantasy Films., here’s a review of Ladyhawke (1985) – by Jeanette of The Mundane Adventures of a Fangirl

Thanks again to Jeanette of The Mundane Adventures of a Fangirl for choosing this month’s genre.

Next month’s Genre has been chosen by Keith of Keith Loves Movies and it is Spy/Espionage Films.

Please get me your submissions by the 25th of April by sending them to ispykeith@movierob.net

Try to think out of the box! Great choice Keith!

Let’s see what Jeanette thought of this movie:

I am not one for romance…if you know me, that’s not a shock.  That being said, I do enjoy a good fantasy epic movie with a little romance thrown in.  There are several examples of this – Princess Bride being the most well known and probably in the top 10 of greatest all-time movies.  Slightly less well known is the movie “Legend”, which you may have never heard of.  It’s from 1985 and directed by the amazing Ridley Scott.  It stars an up and coming actor (at least at that time) named Tom Cruise.  He plays a young man who must stop the Lord of Darkness from both destroying daylight and marrying the woman he loves (Mia Sara).

There’s fairies! and dwarves! and unicorns! But you’re not allowed to touch the unicorns!   There’s just all kinds of crazy magical beings.  The most impressive is Tim Curry’s lord of darkness – and those horns.  I’m not even sure I can describe them.  It’s worth checking out.  I’m not sure the movie is all that good – but it’s certainly entertaining.  And those horns!  Plus, you know, unicorn – but it’s not as cool as the unicorn in Cabin in the Woods.
Ladyhawke, made that same year, stars Rutger Hauer, Michelle Pfeiffer, and Matthew Broderick (this was released prior to Ferris Bueller).  It is, in my opinion, second only to the Princess Bride in terms of amazing fantasy epic romances.

Broderick plays Phillipe, a thief who escapes from prison only to encounter a knight on a revenge quest.  Everybody loves a good revenge quest.  The knight and his love have been cursed by the Bishop of Aquila after she spurned his advances.  During the day, she is a hawk, and he is human; at night, he’s a wolf, and she’s human.  They are cursed to always be together, but always be apart.  After the knight rescues Phillipe, they travel together, and Phillipe gets sucked into the tragic story – enough that he helps discover a way to break the curse.  It involves both of the lovers standing before the bishop in human form, which of course, is impossible – unless there’s going to be an eclipse.  Spoiler alert – there’s going to be an eclipse.  The adventure continues as they try to sneak back into the castle to face the bishop.
The story is simple, the characters clear, and the movie is really well shot. Why?  It’s directed by Richard Donner.  Donner did a lot of directing on many old 70s action TV shows, but that’s not why you know him.  You know him from 1978’s Superman, followed by 1980’s Superman II, which were shot mostly simultaneously.  He also directed the Goonies, Lethal Weapon (1,2, 3, and 4 ), and Scrooged (one of my favorite Bill Murray movies) just to name a few.  Tivia nonsense alert:  he actually had been up to direct the 1989 Batman, and wanted to cast Mel Gibson as Batman – thank goodness for Tim Burton.  There’s a sentence I never thought I would say.  Watch this and imagine Mel Gibson.  yikes.

Donner did a beautiful job on Ladyhawke, using sweeping landscapes to help tell the story.  The action is intense and fun.  The early effects of the transitions from human to animal are subtle, not perfect, but nicely done.  There are lots of little comic moments, demonstrating Broderick’s great timing and likeability.  Phillipe serves as the audience’s connection to the story, and almost as an in-scene narrator.  The story quickly picks you up and builds to the point that when it finally reaches it’s final battle scene, you are caught up in the emotion.  Much of this is due to Hauer and Pfeiffer, who have amazing chemistry for a couple who spend almost no time on screen together!   Also, Alfred Molina is in it, because he’s in almost every movie (“Throw me the idol – I’ll throw you the whip!”).
If you haven’t seen it, or haven’t seen it in a long time, Netflix it now.  You’ll be pleased.
9 out of 10.
Bonus video 1.  The greatest fantasy/romance/comedy of all time – and one of the greatest movies of all time:  the endlessly quotable Princess Bride.  “Anybody want a peanut?”

Bonus Video 2:  Broderick’s best movie – also one of the best movies of all time:  the endlessly quotable Ferris Bueller’s Day Off.  Incidentally starring Mia Sara – who was in Legend…it’s all one big circle.

Bonus Video 3:  The only recent (2007) fantasy epic that I have seen that is really really good:  Matthew Vaughn’s Stardust – also with Michelle Pfeiffer…if you haven’t seen this – Netflix it now…