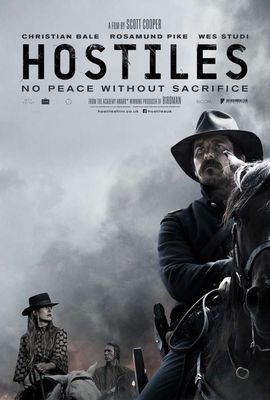 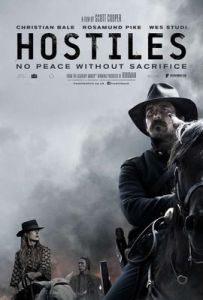 “If I did not have faith, what would I have? ” – Rosalie Quaid

Brief Synopsis – An Army captain who has been fighting Indians all his life is tasked with transporting a freed Indian chief and his family across dangerous territory.

For me, it falls short for that, but it still was worth the wait.

This is a very enjoyable western largely due to the fact that it works on multiple levels while simultaneously giving numerous message along the way.

Christian Bale is superb in the lead here and is able to give us a very complex character who must learn to adapt to whatever his current situation turns out to be.

He hated the Indian Nations for brutalizing and killing his friends, comrades and fellow Americans yet also knows that he has also performed nefarious acts in their own right.

Rosamond Pike is also great here and proves how amazing an actress she can be with this performance.

I’m actually quite surprised that she wasn’t even able to garner even a best supporting actress nomination for this very powerful performance.

This is not a film for the weak hearted and it is quite violent and brutal as it tries to show how dangerous and homicidal the West was.

It is a great example of the fact that time and mutual understand can try to cause positive ripples between foes.

This isn’t the sort of film that is easily rewatchable yet I believe that there is so much going on in the story that it deserves to be revisted after one takes a hiatus of a few months or even years.

Bottom Line – Great western that works on numerous levels in order to present its multi-fold message. Bale is superb as always and gives us a complex character who tries to adapt himself to his current situation. Pike is also amazing here and I’m surprised she didn’t get any award nominations for this performance that she gives us. This is an overtly brutal telling of a “Cowboys and Indians” tale and it works really well as an example of how time and understanding can cause “positive” ripples in the world.  Not the kind of film that is probably an easy rewatch, but there is so much to take in, it’s possible that after a long wait, it should be revisited because of the kind of story it tells. Recommended!

MovieRob’s Favorite Trivia – The widow of credited screenwriter Donald E. Stewart found the “Hostiles” script when moving houses. Stewart, who died in 1999, had not shipped the manuscript to any studios, and his wife was surprised to come across it. After seeing Crazy Heart (2009) and Out of the Furnace (2013), she felt that Scott Cooper was the right man to shepherd it towards the screen. (From IMDB)