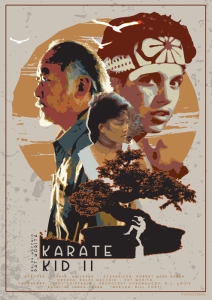 “Daniel-san, never put passion before principle. Even if win, you lose. ” – Miyagi

Brief Synopsis – Following his win at the karate Championship, Daniel and Mr. Miyagi travel to Okinawa to honor an old promise.

My Take on it – This is a film that I highly anticipated for two years after the first film became a fast favorite of mine.

Having read the novel adaptation of the first film, I was upset that they left out the end scene, but was excited upon seeing that it was instead included ion this film showing what happened to the Cobras and their Sensei following the tournament.

The problem here is that despite that interesting scenes, this film feels vastly inferior to the original story and doesn’t add enough tension to make the viewer care.

Despite the fact that this film deals with a “real” fight instead of a tournament, one would hope and expect the stakes to feel as if they have been heightened, yet they aren’t at all and in some ways the fight scenes in this film feel laughable instead of thrilling or even interesting.

The other good thing about this film is the theme song by Peter Cetera which is amazing,.

The song Glory of Love has become so iconic over the years and was definitely deserving of both it’s Golden Globe and Oscar nomination for Best Original Song.

Unfortunately, this song is the most memorable part of this film and it’s a shame that the same can’t be said for the film itself.

Bottom Line – Vastly inferior sequel to the original that doesn’t manage to pack the punch of the first storyline.  The characters aren’t as witty and interesting here and the story itself, despite being “real” instead of via a tournament, just don’t feel as interesting or thrilling. Great song by Petere Cetera that deserved it’s Oscar nomination; Glory of Love is quite memorable despite this film not being so.  They should have stopped after the first one.

MovieRob’s Favorite Trivia – Bill Conti chose to score this movie instead of Rocky IV (1985). Coincidentally, Peter Cetera originally wrote “Glory of Love” for Rocky IV (1985), but Sylvester Stallone rejected it, in favor of “Hearts On Fire”. (From IMDB)