For this month’s next review for Genre Grandeur – Spy/Espionage Films, here’s a review of Top Secret (1984) by  Jeanette of The Mundane Adventures of a Fangirl

Thanks again to Keith of Keith Loves Movies for choosing this month’s genre.

Next month’s Genre has been chosen by Dell of Dell on Movies and it is Anti-Hero Films.

Try to think out of the box! Great choice Dell!

Let’s see what Jeanette thought of this movie: 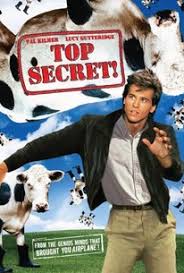 Out of the country trips sure do cut into my movie-viewing time! I just returned back from an amazing trip to China with my dance troupe (check us out at http://www.TamarindTribalBellydance.com – and come visit us for Tribal Union this August), and so I haven’t been to the theater lately, but Top Secret was on TV recently, which reminded me just how much I love it.

The Brothers Zucker (David and Jerry) along with Jim Abrahams, were responsible for some of the zaniest spoof comedies on record, including the Naked Gun Series, Hot Shots, and Airplane!

One the very first – after the Police Squad TV series – is the movie Top Secret! It is a spoof of spy movies, and features Val Kilmer in his first film role as an American Rock and Roll singer who accidentally gets caught up in an espionage tale.

Nick Rivers is a very popular American rock star in the 40s, with hits like Skeet Surfin’. He is traveling to East Germany to perform at a cultural festival. Unbeknownst to him, the festival is serving as a front so the East Germans can reunite the country under their harsh rule. While at dinner, Nick meets Hillary Flammond, a member of the resistance. He pretends to be her date, and later encounters her at a ballet, where he saves her from the police but is captured. While captured, he accidentally meets Hillary’s father, who is a great scientist being forced to create a weapon. To avoid an international incident, Nick is told to perform and rescued immediately after by Hillary, who takes him to meet the rest of the resistance. Nick has to deal with an ex-boyfriend of Hillary’s, a group of resistance fighters, an attempt to rescue Dr. Flammond, and a traitor (gasp!).

Honestly, the plot does not matter, as with all ZAZ movies, you are not watching for the plot, you are watching for the insane gags that happen between the storylines. This one includes many: the giant phone, the “Find Him And Kill Him” stamp, the chinstrap, the little German, the little horse, the backwards bookstore, Déjà Vu thinking he’s met someone before, and Chocolate Mousse’s high five. It’s absolutely insane, but the perfect movie to watch on a Saturday afternoon with popcorn when the weather is too questionable to venture out.

Overall, if you haven’t seen it, but you love Airplane and Hot Shots, you need to check it out. In fact – write off the whole evening and watch Airplane, this movie, and Hot Shots right after one another.