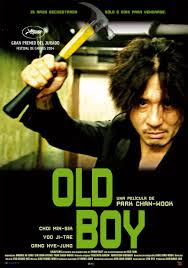 This month’s Genre has been chosen by Dell of Dell on Movies and it is Anti-Hero Films.

Let’s see if I felt that this movie would be worthy of being in the company of my others favorite movies in the genre of Anti-Hero Films.…

“If they had told me it was going to be fifteen years, would it have been easier to endure?” – Dae-su Oh

Brief Synopsis – A man is abducted and held prisoner for 15 years in a secluded room. when he is released, he goes on a mission to find his captor in order to find out why he was kidnapped.

My Take on it – This is a movie that I’ve been meaning to see for yuears and since I’ve recently started to try and expand my knowledge of foreign language films, I decided to check this out.

I saw the American version of this film and was quite shocked about where the story went, but I had heard that the original was still a much better film.

I think that my problem here is that I had too high expectations that this film would be different than the American version and the fact that I knew what would eventually happen takes so much away from the experience and shock of this kind of storyline.

I think that if I hadn’t known where this film’s storyline was moving towards, I would have enjoyed it even more.

The violence here is done really well yet it all seems quite cartoonish in the way it all is depicted.

All in all, I was quite disappointed that this film just wasn’t able to be as effective as I had hoped it would be.

Bottom Line – Had too high expectations for this film.  Since I have seen the Hollywood remake, there were no real surprises as to what will happen and that takes away from the impact that this story can have when one sees it for the first time. The violence is very cartoonish despite looking cool.  Unfortunately, the story isn’t as effective as it might have been which was pretty disappointing for me.

MovieRob’s Favorite Trivia – Dae-su Oh bangs his head right after stopping Mi-do from reading his diary. This “head banging” was not a scripted action. However Hye-jeong Kang (Mi-do) kept her cool and continued on with her lines. The director, in an interview, said that he kept and used this supposedly NG scene for its comical and emotional value. (From IMDB)

Genre Grandeur Worthy? – Not really. This is a powerful film, but only when you don’t understand what’s at stake, once you know the secret, things look comical instead of poignant.