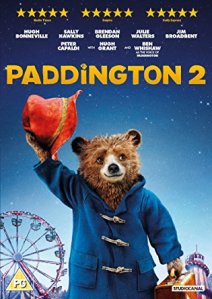 “Aunt Lucy said, if we’re kind and polite the world will be right.” – Paddington

Brief Synopsis – The lovable bear living in London decides to get a job in order to buy his aunt a pop-up book showing all of the famous sites of London.

My Take on it –  This is a sequel that I have been looking forward to seeing for quite some time since the original film was so entertaining and enjoyable.

The special effects help make the story feel more realistic and we can easily believe that a little talking brown bear who loves marmalade lives in suburban London.

The advantage of a sequel like this is that they don’t need to spend much time re-introducing character that we already know from the previous film and at the same time jump right into the storyline.

The antics and adventures of Paddington throughout this film are hilariously done and they get the slapstick aspect of it all done so beautifully.

In addition t the familiar characters from the original film, we get to meet a few new characters.

The one that stands out the most is the one portrayed by Hugh Grant as a devious has-been actor. Grant usually plays the lovable nice guy, but he is great playing so much against type in this film.

As much as I wanted this film to be better than the original, it unfortunately doesn’t manage to eclipse the story told in the original yet it still does a great job of continuing that story while leaving things open for future additions to this film franchise.

Bottom Line – Very enjoyable sequel that allows us once again to enter this fascinating world that includes a talking bear. The fact that we are already quite familiar with most of the characters helps things get moving quite quickly. The adventures and antics of this little brown bear who loves marmalade are quite funny and he once again makes the audience laugh at the slapstick humor presented here. Along with the characters featured in the first film, we get to meet a few new ones including a devious actor played by none other than Hugh Grant, who does such a great job in that role.  Unfortunately, this film and its story isn’t able to eclipse the one told in the first film, yet it is still quite a worthy continuation of the story and leaves things open for a few more entertaining sequels to pop-up over the next few years. Recommended!

MovieRob’s Favorite Trivia – The best-reviewed film ever on Rotten Tomatoes. As of April 11, 2018, the movie has 193 Fresh reviews and no naysayers, overtaking 163 Fresh and 0 negative critiques from previous record-holder Toy Story 2 (1999). (From IMDB)