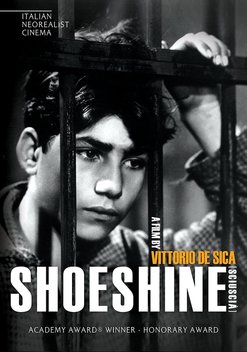 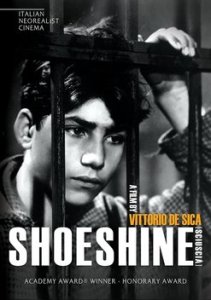 “[as the film projector is being set up in the boys’ prison] In here they feed us, they shelter us, they give us clothes, and they even entertain us. What else could we want? This is paradise! ” – Pasquale Maggi

Brief Synopsis – Two young shoeshine boys try to save enough money to buy a horse but when they enter into a scam by a local hoodlum, their troubles begin when the police get involved.

My Take on it – After seeing Vittorio De Sica’s Bicycle Thieves (1948) recently, I was intrigued to see this other film of his that came out a few years earlier and is claimed to have been just as great.

I must say that I liked this film a lot yet I wasn’t overwhelmed by it like I was with Bicycle Thieves (1948).

In this film, De Sica also utilizes the choice to have non actors play his characters in order to give the viewer a more realistic feel of it all.

It works very well here as we get to see the kind of life lived by young boys post World War II who must earn a living for themselves and their families in such troubled times.

The story moves along very realistically and turns some very disturbing corners along the way yet still remains quite realistic and gripping in all that it shows.

In a way, it sometimes feels as if we are being shown footage of actual events as they happen because it looks so real.

This film won a special Honorary Oscar that year in what would become a precursor for the eventual Best Foreign language Oscar.

Bottom Line – Very interesting premise that works due to the story’s realistic perspective on things. The plot feels like a true to life story which helps keep things gripping the whole time due to the fact that it seems as if we are watching real events. The use of non-professional actors helps keep things genuine and that is why the films made by DeSica were so groundbreaking at the time. Won an Honorary Oscar in what became the precursor for Best Foreign Language Film. Recommended!

MovieRob’s Favorite Trivia – The title is a Napulitan corruption of the English word “shoe-shiner.”  (From IMDB)